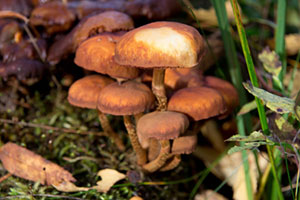 AMES, Iowa – The Iowa State University Plant and Insect Diagnostic Clinic can help Iowans identify the mushrooms growing in their backyards and elsewhere, but cannot say whether they’re safe to eat.

“We have been receiving numerous requests this spring to identify mushrooms and advise on edibility,” said Laura Jesse, director of the ISU Plant and Insect Diagnostic Clinic. “We are happy to assist in identification of fungi, but we don’t make recommendations about whether you should eat them. In addition, we often receive digital images where we cannot see key characteristics, making it impossible to identify a mushroom with certainty.”

Multiple factors may contribute to wild fungi being potentially poisonous, most of which are beyond the control of the experts who identify the specimens brought into the clinic, Jesse explained.

“Some edible and deadly poisonous mushroom species are not only similar in appearance, but may be found growing together. The toxin content in individual mushrooms may vary, and the effect produced by toxins may vary from person to person. There are toxins in most ‘edible’ species that must be cooked off in order to be safe, and some ‘edible’ species are very toxic when consumed with alcohol, even within a few days,” Jesse said.

“Fungi that are generally considered edible may cause serious allergic reactions when consumed by some individuals. In addition, wild fungi often are contaminated with pesticides, pollutants, bacteria or other decay organisms, which we cannot reliably assess in the clinic. For these reasons, it is our policy to not recommend edibility of wild fungi,” Jesse said.

The ISU Plant and Insect Diagnostic Clinic diagnoses plant problems, such as plant diseases, insect damage and assessment of herbicide damage, and identifies insects and weeds from the field, garden and home. The PIDC is a joint effort of ISU Extension and Outreach Plant Pathology, Entomology, Horticulture and Agronomy. To learn more about the clinic or to submit a sample, go to www.ent.iastate.edu/pidc.