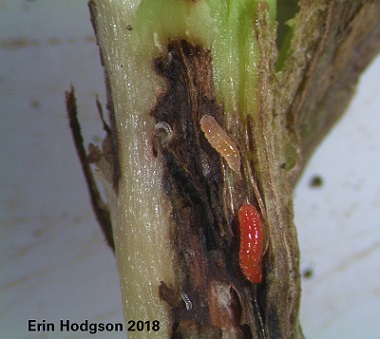 AMES, Iowa – Iowa State University Extension and Outreach entomologists have identified and confirmed the presence of a new soybean pest, the soybean gall midge, in 12 Iowa counties: Lyon, O’Brien, Clay, Plymouth, Cherokee, Buena Vista, Woodbury, Harrison, Shelby, Pottawattamie, Cass and Page. In 2016 and 2017, there were isolated reports of soybean injury as a result of soybean gall midge in northwest Iowa. The pest’s presence was reported in 2011 in Nebraska and 2015 in South Dakota.

Midges are a fly in the Cecidomyiidae family, with 6,000 species worldwide; at least 1,100 species are in North America. Midges are small (2-3 mm in length), have long antennae and have unusually hairy wings. Most midges are fragile and weak fliers. Many midge species are considered economically important plant pests; however, some are predatory on aphids and mites. Midge maggots are not mobile and must be located on or near the host plant to survive. Midge larvae feed within the host plant tissue, creating abnormal growths called galls. This particular midge larvae are clear-colored and eventually turn bright orange as they mature.

Not much is known about the soybean gall midge, and entomologists have not been able to confirm the species as of yet. Plant injury as a result of the pest has been most severe at field edges, which is a possible indicator that adults fly to new soybean fields following the growing season. Injury is usually restricted to the base of the plant. Initially, infested stems look swollen, then eventually turn brown and break off, resulting in plant death. In some instances, plants were infected with a fungal disease, but this was not a consistent occurrence.

From observations thus far, cultural control practices, including variety selection, time of planting, row spacing, tillage or manure application, do not appear to have an impact on soybean gall midge. Insecticidal seed treatment does not appear to effectively suppress the midges. Entomologists think that the soybean gall midge can complete at least two generations in Iowa, but it is not known yet how long a generation takes to develop. It is assumed that it can overwinter in Iowa, and does so as a pupa in the soil or leaf litter similar to other midges.

If you see these midges infesting a soybean field in Iowa, please contact Erin Hodgson, associate professor and extension specialist in entomology at Iowa State, via email at ewh@iastate.edu or on Twitter @erinwhodgson. More information will be shared as it becomes available about this pest, as well as effective management solutions as they become available.

Be sure to follow ISU Extension and Outreach information channels for updates:

Photo: Gall midge in the stem of a soybean plant. The stem exhibits swelling when infected, turns brown and eventually falls over, killing the plant. These midges start out clear-colored but turn orange as they mature.

Category:
Crops
About the Authors:
Department of Entomology