AMES, Iowa — Honey bees are facing tough times. Colonies of these pollinators are being lost at an unprecedented rate, and some are blaming farming practices, in particular, the intensive corn and soybean production systems in the Midwest. New research by Iowa State University and University of Illinois scientists offers a more nuanced view of the role of agriculture in honey bee health than what has been previously known. 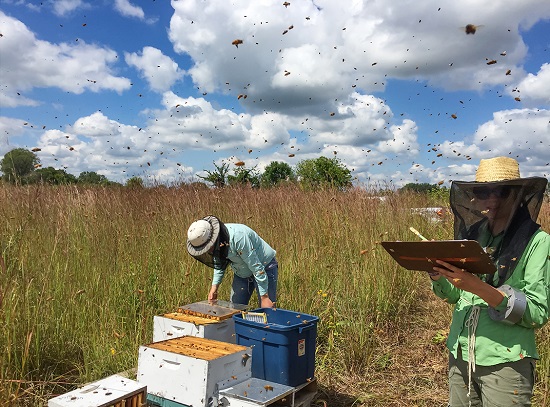 Scientists placed honey bee hives next to soybean fields in Iowa and tracked how the bee colonies fared over two growing seasons. The bees did well for much of the summer, they found. The colonies thrived and gained weight, building up their honey stores.

But in August, the trend reversed. By mid-October, most of the honey was gone, the team discovered, and the bees themselves were malnourished.

The researchers moved some of the affected hives to reconstructed prairie sites with a lot of late-flowering prairie plants. Those hives rebounded to healthier levels and were better prepared for winter.

“We saw a feast or famine kind of dynamic happening, where in the middle of the summer the hives in ag fields were doing great. In fact, the hives in the most highly agricultural areas out competed hives in areas with less row-crop production," said Amy Toth, professor of ecology, evolution, and organismal biology at Iowa State. "But then they all just crashed and burned at the end of the season,”

Their findings, published this week in the Proceedings of the National Academy of Sciences, offer new insights into the role of agriculture on honey bee survival, according to the report’s authors.

Overall, the results show that intensively farmed areas can provide a short-term feast, but such landscapes are unlikely to sustain the long-term nutritional health of colonies. However, reintegration of biodiversity into such landscapes may provide relief from late season nutritional stress.

“There’s been a lot of interest in how bees respond to agriculture,” Dolezal said. “There’s been work on pesticides, and predictions that intensively farmed landscapes have lost a lot of floral resources important for pollinators.”

On the other hand, there have been studies that found honey bees do well in agricultural areas, Dolezal said. “One hypothesis has been that bees near agricultural zones have more access to flowering crops and weeds like clover than those near forests, which can have fewer flowering plants,” he said.

To learn more about what plants the bees relied on, Ge Zhang took samples of pollen carried by foraging bees on their way back into the hive. Over the entire year, over 60 percent of their pollen collection was from clover. 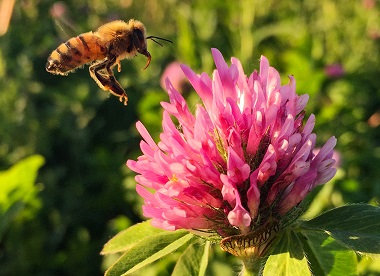 The researchers were surprised how much clover the bees were foraging on in landscapes devoted nearly exclusively to corn and soybeans.

“Most of the field edges are mowed, but can contain clover,” said O’Neal. “This little bit of land could be offering a significant source of food for bees.”

Soybean and clover bloom until late July in central Iowa, where the study was conducted. In early August, that food supply dwindles greatly, however. Between early August and mid-October, the researchers found that the weight of the study hives next to soybean fields dropped, on average, more than 50 percent. The bees were eating through their winter stores before the onset of cold weather.

“More than 80 percent of Iowa is dedicated to agriculture. While the two most important crops do not require bee pollination, corn can provide pollen and soybeans produce a lot of flowers, which can be a source of nectar for honey bees,” said O’Neal. “The weight gain of a hive is due to honey, which comes from nectar.”

The nectar is used to make honey — an essential food for overwintering bees — and the pollen provides other nutrients, like proteins and lipids. To survive the upcoming winter, honey bees must gather enough nectar and pollen from surrounding areas to tide them over.

“As winter approaches, the last generations of bee larvae normally experience unique physiological changes that better prepare them for the harsh season,” said Dolezal. “These bees have higher fat stores and their aging is slowed so they can get through the winter,” he said. “But we found that the winter bees near soybean fields did not have the same level of fat stores.”

In part of the experiment led by Ashley St. Clair, the team moved hives to prairie sites in August to see if the bees fared better. Indeed, bees near prairie developed higher fat stores.

“This suggests that the rebound hives experienced when we put them in the prairie also trickled down to improved nutritional health for individual bees,” Toth said.

The researchers do not recommend that beekeepers move their hives to prairies. Remnant and restored prairies are rare and too small for many hives, the researchers said. Overstocking with honey bees could even negatively affect native bees. Instead, the team is testing an intervention, where strips of reconstructed prairie are installed inside or alongside agricultural fields. In addition to feeding the bees at a crucial time in their life cycle, prairie strips could also reduce erosion and prevent the flow of nutrients from farm fields into waterways, the team said.

This article was developed in cooperation with the University of Illinois News Bureau.

PHOTO: Honey bees in hives placed near flowering prairies in late summer and early fall were much healthier than those left near soybean fields after August, the researchers found. Pictured here are study co-author Ashley St. Clair (at hives), and Zoe Pritchard, 2018 ISU graduate in biology and environmental studies. Photo by Amy Toth.