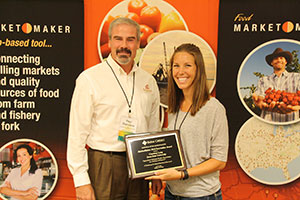 Long coordinates a program that helps communities develop and implement local food systems through a three-year, community design process. A piece of that includes food systems and health assessments for communities in Iowa. MarketMaker is one of the primary tools used to identify food system gaps and assets around the state and identify opportunities for innovative projects that are complementary to existing agricultural enterprises.

The Farm Credit MarketMaker Innovation Awards showcase best practices that contribute to the development of local and regional food systems and help farmers’ connect to new market opportunities. Farm Credit has sponsored this award for six years and contributes incentive cash rewards for the winners and runners-up to use to advance their MarketMaker related programs. Paul Dietmann, Farm Credit’s emerging markets specialist with Badgerland Financial in Madison, Wis., was on hand to present the awards.

Receiving top honors was John Westra with the LSU AgCenter and Louisiana MarketMaker. His proposal entitled, “Components that Worked for Louisiana MarketMaker,” built upon a previous award winner, the “Market Ready Training Program,” developed at the University of Kentucky. Westra and his team adapted the program for Louisiana and were able to prepare more than 200 farmers to sell into wholesale markets. During the program the LSU team also introduced producers to ways they could use MarketMaker to find buyers and identify new market opportunities. In addition, producers, grocers, restaurants and caterers learned how MarketMaker could be used as a way to source locally and regionally grown products.

“We are thrilled to partner with Farm Credit to give this year’s award winners some well-deserved recognition,” said Dar Knipe, co-founder of the MarketMaker program and managing partner of the Global Food and Ag Network. “We know that shining a light on their good work will also help others who work with farmers and communities to improve livelihoods and create sustainable market systems.”

“Farm Credit is pleased to support all the innovators who enlist MarketMaker websites for the benefit of local farmers and ranchers,” said Matteson. “Growing crops and livestock isn’t easy, but selling is even harder. Expanding access to more and better marketing channels is what MarketMaker is so good at.”

MarketMaker is a national network of states that employ interactive technology and information to connect farmers and fishermen with food retailers, grocery stores, processors, caterers, chefs and consumers. This collaborative effort of Land Grant Universities, Departments of Agriculture, and food and agricultural organizations works to build a virtual infrastructure that brings healthier, fresher and more flavorful food to the average consumer. MarketMaker was created by the University of Illinois at Urbana-Champaign in 2004 and is licensed to and managed by Global Food and Agricultural Network, LLC. MarketMaker is guided by an advisory board made up of representatives from participating partner states. To learn more about the Food MarketMaker program please contact Dr. Richard Knipe rknipe@illinois.edu or explore the MarketMaker website or one of the many State MarketMaker websites.