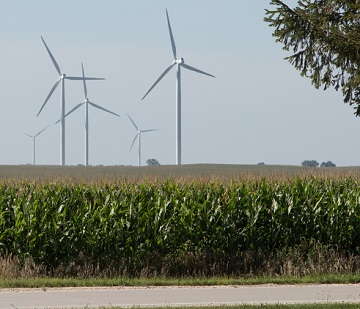 AMES, Iowa — Iowa State University researchers have found that wind turbines located in agricultural fields are a plus for the crops growing around them.

The overall effects on crops growing in wind farms appear to be positive said Gene Takle, Iowa State agronomy professor. He has led a team of plant and soil scientists along with extension specialists who have been looking into the effects since 2009.

They started their work after seeing more wind farms and turbines pop up around the state. The new land use was positive for the landowners where they were located, but the researchers wondered if it was the same for the farmers growing crops.

“It’s unusual because we’re continuing the previous land use and we’re adding another,” he said. “We’re sort of double-cropping because these can be thought of two forms of energy production. The Chinese do this when they plant soybeans in between horticultural crops. We’re planting turbines.”

If the turbines change the microclimate for corn and soybeans, the team wanted to learn if it is a big enough change to be measured and the potential impacts.

He said wind blowing across a corn or soybean field without turbines creates a certain turbulence that carries moisture from the transpiring crop, which rises into the atmosphere and pulls down cooler, drier air. At night the wind is calmer and the land cools.

Turbines take some of the wind energy, slowing it down but increasing its turbulence so it interacts with the crop more, possibly increasing evaporation from the crop or moving carbon dioxide down into the crop.

“The biggest changes are at night and that’s because during the day there’s a lot of chaotic turbulence, just because the sun is heating the surface and the wind is gusty,” Takle said. “At night when it gets pretty calm, the crop cools down and if it’s a humid night you start to get dew formation. If you add the turbines, it looks a little more like the daytime. So the dew formation is delayed and it may start to evaporate sooner.”

Since fungus and mold like a wet environment, the shorter the wet period makes it less favorable for the growth of those potential pathogens. In the fall, the shorter wet period could speed up harvesting because farmers typically have to wait for soybeans to dry in the morning.

Another factor is that turbines bring warmer air down to interact with the cool air near the surface. Throughout the wind farm, the surface is a little bit warmer which inhibits dew formation.

“Satellites can measure surface temperatures and you can see little dots across the state of Iowa and locate every wind farm because they’re slightly warmer than the surrounding area. So we know it has an effect that’s large enough to be seen there,” he said.

Another plus is the air pressure fluctuation measured around wind turbines. Takle said there is a lot of carbon dioxide in the top few feet of soil — as much as two or three times what is in the air. The movement of air by the turbines pumps air down, and the movement draws carbon dioxide out of the soil so more would be available to the plant for photosynthesis.

On the negative side is the tendency of higher temperatures occurring at night in wind farms.
Considering corn, during the day it’s taking in solar energy and carbon dioxide to make plant material. At night it cools down and gives back some of the carbon dioxide, and it gives up more if it’s warmer.

“So the night time warming of the turbines is not a totally good thing,” he said. “Night time temps have been going up over the last 40 years and are becoming a limiting factor for crop yields.”

But overall crops grown in wind farms seem to benefit.

“So there are three ways the crop is being ‘fertilized’ from either the air or from the soil or from increased photosynthesis. We measured increased carbon dioxide uptake during the day, but an increased respiration at night,” he said. “But over the course of the day there was more uptake. So as far as the impact of the turbines on the carbon dioxide processes and the photosynthesis process in the near vicinity of the turbines it’s a net gain.”

His team would like to look at the result of wind movement through a farm as it slows and tends to move up, which could create clouds if the air is warm and moist, and potentially rain.

“Are wind farms a preferential location for cloud formation or something that’s going to provide more rain in an area beyond the wind farm? We don’t know, we have some preliminary measurements that suggest that this is a real effect. Theoretically, you say yes there should be an effect, but is it large enough to be measured or to be important?” Takle asked.