“The land market faced downward pressure initially with the onset of the COVID-19 pandemic, which lowered food demand and resulted in declines in livestock and ethanol prices,” said Wendong Zhang, assistant professor in economics and extension economist at Iowa State University. 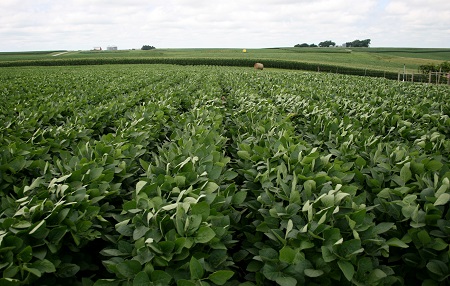 This year’s Iowa Land Value Survey found that the average statewide value of an acre of farmland is $7,559, an increase of 1.7%, or $127, since 2019. The $7,559 per acre estimate, and 1.7% increase in value, represents a statewide average of low, medium and high-quality farmland.

Statewide, Iowa’s high-quality farmland saw a decline in value of 0.1%. However, Zhang said that it’s important to note that number is more indicative of a flat market, rather than a decline, and that several factors have led to a recent rebound in the market.

“The rebound in recent months is due to strong government payments, interest rate cuts, limited land supply and recent commodity price rallies,” said Zhang, who is responsible for leading the annual survey.

In mid-November, both U.S. corn and soybean prices reached their highest point so far this year. Despite some decline since then, both prices are still higher than at the beginning of the year, especially soybeans.

“The export surges related to the phase one deal and China’s efforts to rebuild its hog herd ramped up demand for feed grains,” Zhang said.

“There is definitely concerns and downside risks about the price rallies because post-harvest prices are typically lower,” he said. However, he stressed that China is still at least 10-15% short of its regular hog inventory, so farmers should continue seeing increased feed grain demand.

Additionally, Germany, a key competitor for U.S. pork exports, is now battling with African swine fever, the same disease that decimated China’s hog industry, which could increase U.S. pork exports in the future.

Zhang also said that farm payments in 2020 helped prop up the farmland market “in a big way.”

According to the USDA’s Economic Research Service, farm payments will increase 107% in 2020, mostly due to supplemental and ad hoc disaster assistance for COVID-19 relief. They also project net farm income will increase 43.1% in 2020.

“Strong demand for pasture and timber grounds, which are even more appealing now with social-distancing requirements, contributed to the rise in low-quality land value,” Zhang said.

However, he noted that when compared to high-quality land, it doesn’t take a substantial change in the dollar value of low-quality land to constitute a large percent increase in values.

Seventy-eight of Iowa’s 99 counties showed an increase in land values. For the eighth year, Scott and Decatur counties reported the highest and lowest values, respectively. Despite having the highest overall value, average land values in Scott County decreased $178 per acre to $10,659.

In general, land values across crop reporting districts increased — only the Southwest district reported a decline in land values (-0.9%). The largest percentage increases were in the West Central and South Central districts, 3.9% and 3.8%, respectively; however, both the Northeast and Northwest districts reported increases of 2% or higher.

High-quality land in five of Iowa’s nine crop districts saw increases of less than 2%, while East Central and Southwest districts reported a decline of more than 2%.

Land values were determined by the 2020 Iowa State University Land Value Survey, conducted in November by the Center for Agricultural and Rural Development at Iowa State and Iowa State University Extension and Outreach. Results from the survey are consistent with results by the Federal Reserve Bank of Chicago, the Realtors Land Institute and the U.S. Department of Agriculture.

The Iowa State Land Value Survey was initiated in 1941, the first in the nation, and is sponsored annually by Iowa State. The survey is conducted every November and the results are released mid-December. Only the state average and the district averages are based directly on the Iowa State survey data. County estimates are derived using a procedure that combines the Iowa State survey results with data from the U.S. Census of Agriculture.

The 2020 survey is based on 707 usable responses from 484 agricultural professionals. Sixty-seven percent of the 484 respondents answered the survey online.

CARD offers a web portal at https://www.card.iastate.edu/farmland/ that includes visualization tools, such as charts and interactive county maps, allowing users to examine land value trends over time at the county, district, and state level.

For over 60 years, the Center for Agricultural and Rural Development at Iowa State University has conducted innovative public policy and economic research on local, regional, and global agricultural issues, combining academic excellence with engagement and anticipatory thinking to inform and benefit society.