AMES, Iowa—It’s been a difficult year for farmers—the planting season saw an overabundance of rain and delayed planting, the United States’ trade war with China persisted, skewing both commodity prices and demand, and farm bankruptcies rose to the highest level since 2011. However, favorable interest rates, strong yields, and limited land supply combined to help drive Iowa’s farmland values up for only the second time in six years. 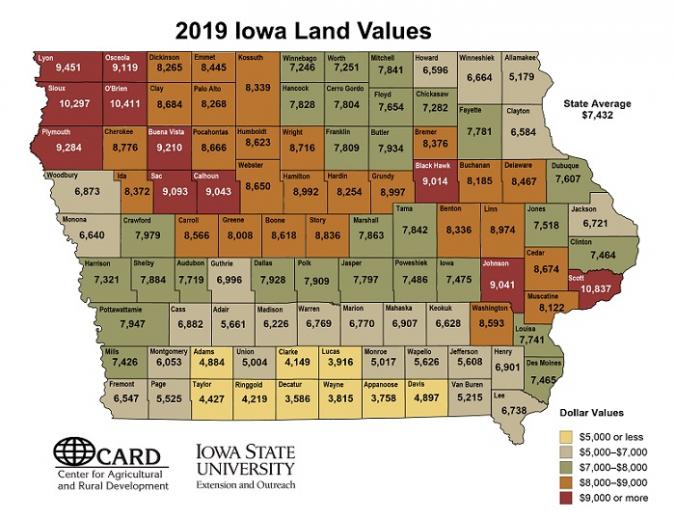 The statewide value of an acre of farmland is now estimated to be $7,432, which represents an increase of 2.3 percent, or $168, since 2018. The $7,432 per acre estimate, and 2.3 percent increase in value, represents a statewide average of low-, medium-, and high-quality farmland.

“The reprieve in the land market, unfortunately, is not driven by a much stronger farm economy,” said Wendong Zhang. Zhang is an assistant professor of economics at Iowa State University and is responsible for leading the annual Iowa Land Value Survey. “This recent modest increase in land values reflects a lower interest rate environment and slowly improving U.S. farm income. However, we are still faced with significant uncertainty, especially the ongoing U.S.-China trade war, which has significantly affected U.S. agricultural exports, especially soybean exports, and lead to lower commodity prices and weaker farm income,” Zhang said. Stronger than expected crop yields in Iowa, and continuing limited land supply helped contribute to the increase in land values, despite low commodity prices.

While the growth in land values is a positive, Zhang warned that it should not be labeled as a “solid rebound” of the land market. “The Market Facilitation Program payments helped soften the blow and stabilize farm income and the land market; however, a no-deal or further escalation of the U.S.-China trade war on Dec. 15 will further amplify trade uncertainties and put downward pressure on farm income and land values,” Zhang said. “The future of farmland market still hinges on the pace and speed of Federal Reserve moves on interest rates, progress in the trade talks, and the availability of land parcels.”

The United States also saw 580 farm bankruptcies in 2019, the highest number since 2011. However, Zhang said that the overall share of bankrupt farms is still low, “but there are more farms under financial stress due to continued low commodity prices.”

Zhang said the growth in Iowa’s land values was noticeably higher this year in the central crop reporting districts (district hereafter). “The Central districts saw larger increases than other districts due in part to stronger-than-expected crop yields over the past few years and strong urban demand.” He also noted that “strong recreational demand” has helped lift the value of low-quality land.

The ISU Land Value Survey was initiated in 1941, the first in the nation, and is sponsored annually by Iowa State University. The survey is typically conducted every November and the results are released mid-December. Only the state average and the district averages are based directly on the Iowa State survey data. The county estimates are derived using a procedure that combines the Iowa State survey results with data from the U.S. Census of Agriculture.

The ISU Land Value Survey is based on reports by agricultural professionals knowledgeable of land market conditions such as appraisers, farm managers, agricultural lenders and actual land sales. It is intended to provide information on general land value trends, geographical land price relationships and factors influencing the Iowa land market. The 2019 survey is based on 679 usable responses from 553 agricultural professionals. Fifty-nine percent of the 553 respondents answered the survey online.

CARD offers a web portal at https://www.card.iastate.edu/farmland/ that includes visualization tools, such as charts and interactive county maps, allowing users to examine land value trends over time at the county, district, and state level.