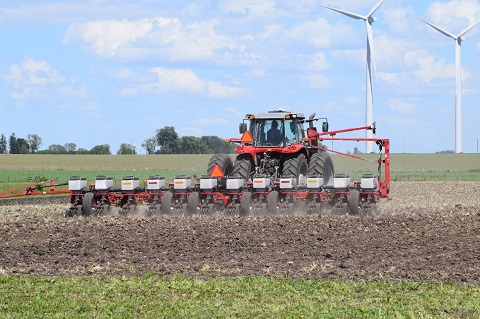 AMES, Iowa – Crop producers who are wondering what they should do about late and prevented planting were given a variety of resources and calculators during a special webinar May 24, presented by Iowa State University Extension and Outreach field agronomists and farm management specialists.

However, Iowans are definitely behind, according to the latest “Crop Progress and Condition Report” issued May 20 by the National Agricultural Statistics Service, which shows the state’s five-year average for corn at 89%, and soybeans at 55%. Producers are also concerned about what they’ve already planted, and whether replanting will be necessary in some fields.

The long-term forecast for the summer months looks like the state could see a cooler, wetter season than normal, according to data from the National Weather Service.

“We’re looking at the potential for below average temperatures and most of the U.S. is at an enhanced potential for above average precipitation,” said Virgil Schmitt, field agronomist with ISU Extension and Outreach.

Producers in general should be able to plant full-season well-adapted corn hybrids until June 1, said Rebecca Vittetoe, field agronomist with ISU Extension and Outreach. After that date, and especially in northern counties, producers will want to start thinking about changing to a shorter-season hybrid. 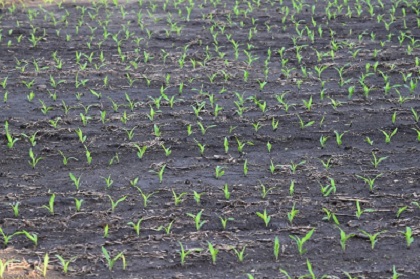 The general rule is to reduce your variety by one maturity day for every two days that corn is planted after June 1. However, Vittetoe said corn hybrids have a tendency to adapt to a shorter growing season when planted later.

Corn planted after May 1 requires about 6.8 fewer growing degree days per day, to reach maturity. Purdue University has an online calculator that can help producers determine the growing degree day requirements for late planted corn, and producers can then determine how many fewer maturity days will be required.

However, Schmitt and Vittetoe both caution producers that the formula can change, based on the weather and the seasonal temperature, and how soon we get a killing frost in the fall.

“There are no guarantees,” Schmitt said. “There will be some risk no-matter which direction we go.”

The speakers also discussed prevented plantings and alternative crop options. Producers may be able to plant soybeans instead of corn, but they need to be mindful of any corn herbicides already applied to the field, which could severely damage the soybean crop.

As deadlines near, producers need to be talking with their crop insurance agents to know exactly how their operation will be impacted, said Ryan Drollette, farm management specialist with ISU Extension and Outreach.

Drollette said producers also need to follow the rules when considering alternative crop options, including the requirement that cover crops on prevented acres not be grazed or hayed before Nov. 1.

Vittetoe said there are many choices for forage crops or cover crops, and producers need to weigh the pros and cons, and how they will use what they grow.

If producers are prevented from planting corn or soybeans, they should still consider either planting a forage crop as a second crop or a cover crop, to help with weed management and to help keep the soil healthy and alive, and to potentially realize a return from another crop.

The webinar was recorded and the full presentation with slides is available online.

To learn more about the webinar and what was discussed, contact Rebecca Vittetoe at 319-653-4811, or rka8@iastate.edu. Virgil Schmitt can be reached at 563-263-5701, or vschmitt@iastate.edu; and Ryan Drollette can be reached at 319-337-2145, or drollett@iastate.edu. Questions can also be addressed to your local ISU Extension and Outreach field agronomist or farm management specialist.