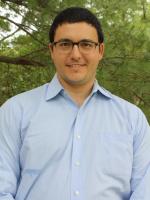 The report was compiled by Alejandro Plastina, ISU Extension and Outreach economist, using farm level data provided by the Iowa Farm Business Association. It is available through the Extension Store.

“This report is a very useful tool to understand where your operation is currently standing and to compare that with similar farms in Iowa,” Plastina said. “The data provided by the Iowa Farm Business Association was incredibly important to this study. This is the first time in nearly a decade this data was available to Iowa State and it helped immensely in our efforts to understand the current financial situation on Iowa’s farms.”

This report is different from others because farm operations are classified based on their ability to produce free cash flow. The farms are broken into one of five groups, each group comprising 20 percent of the number of active farms (top 20 percent, upper 20-40 percent, middle 20 percent, lower 20-40 percent and lowest 20 percent). This structure allows the report to be used for benchmarking each farm operation against similar farms, instead of a simple industry average.

Because the data used in the study come from IFBA accounting records, it 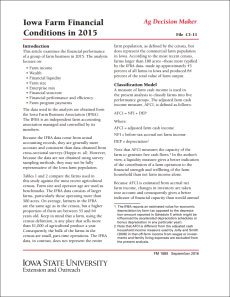 is generally more accurate and consistent than data obtained from cross-sectional surveys. It also provides a very detailed snapshot of farm conditions at the start of 2016.

“Most farms had strong balance sheets and were in a good solvency position at the start of 2016,” Plastina said. “Farmers enjoyed a long period of very good prices and sustained profitability, which meant 80 percent of farms were in that high solvency position. Farmers had built their equity during the good times and are now relying on those retained earnings.”

As commodity prices for both crops and livestock have dipped since the start of 2015, cash flow in the operations became a concern for some farmers. While most farms were still in good shape by the end of 2015, the lowest 20 percent of operations were in a weak liquidity position.

“There is a general belief that farms across the board started 2016 with low liquidity levels, and that isn’t the case,” Plastina said. “Only the lowest 20 percent had weak liquidity levels at the end of 2015 compared to all others who had high or average levels.”

Liquidity has been pushed down by profitability and return on investment has been low, Plastina said. Many of the farms that showed a negative in farm income had a high proportion of their gross farm sales coming from livestock.

One way the top performing farms separated themselves from others is in marketing. The top 20 percent of farms received corn and soybean prices that were, respectively, 33 cents and 53 cents higher than farms in the lowest 20 percent.

“So far there haven’t been any reports that show the relevance of marketing,” Plastina said. “It is very clear how those farms that do better are not only better in terms of production but in terms of the final price they get for their crops.”