AMES, Iowa – Climate change is impacting Iowa agriculture and negative impacts are expected to increasingly threaten agricultural productivity in the state. There are many ways, however, that farmers and landowners can increase the resiliency of production systems, reduce greenhouse gas emissions, and even capture carbon.

The 2020 Iowa Farm and Rural Life Poll survey explored farmers’ perspectives on climate change and ways that farmers can address its impacts on agriculture. The project is supported by Iowa State University Extension and Outreach and the Iowa Agriculture and Home Economics Experiment Station.

“We’ve asked questions about climate change three times over the last decade, so we can now look at changes in perspectives over time,” said project director J. Arbuckle, professor and extension sociologist at Iowa State University. 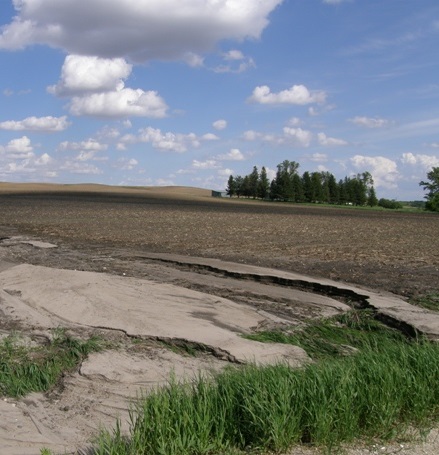 According to the poll, also known as the Farm Poll, farmers’ climate change beliefs shifted substantially between 2011 and 2020. In 2020, 81% of farmers indicated that climate change is occurring, up from 68% in 2011. That number is higher than for the general public in Iowa, which recent research shows is 67%.

Half of farmers indicated that they believe that extreme weather will become more frequent in the future. Over half reported that they are concerned about the potential impacts of climate change on their farm operations; an increase from 35% in 2011. Nearly 60% agreed that they should take steps to protect the land they farm from increased precipitation.

“Farmers have experienced a lot of extreme weather since 2011, from droughts to extreme wet, and it’s likely that’s driving some of the changes in perspectives,” said Arbuckle. “Of course, farmers are closer to the weather than most folks, and that extreme weather can really make it difficult to plant, raise and harvest high-quality crops.”

Many soil and water conservation practices can help to make farm operations more resilient in the face of climate change, and the Farm Poll survey asked farmers whether they had made management changes in response to weather variability and its impacts. Most farmers reported multiple adaptation actions. The most prevalent was scouting for pests and disease, with 52% of farmers reporting a moderate or major increase in that activity. Increased use of many recommended conservation practices was common, with 43% reporting increases in use of no-till and 22% reporting an increase in use of cover crops. On the down side, 32% reported increased use of pesticides.

It is increasingly recognized that agriculture can play an important role in combating climate change. Through practices such as no-till and cover crops, carbon can be captured and stored it in the soil, reducing atmospheric concentrations of carbon dioxide while simultaneously building soil health and resilience.

“A lot of work is going into development of programs and markets to help farmers make ‘carbon farming’ a part of their farm enterprises, so we put a question about that in the survey,” said Arbuckle. “Thirty-seven percent of farmers agreed that such initiatives should be pursued, compared to 17% who disagreed.”

The results showed that nearly half were uncertain, which Arbuckle said makes sense given that such programs are hypothetical at this point.

“To me these results signal an openness to strategies that help make individual farms more sustainable while also addressing the climate crisis,” Arbuckle said. “Iowa’s dominant cropping systems face a lot of sustainability challenges. Income from carbon capture could be a great step in several right directions.”

The most recent poll was published in December 2020 and is available online at the ISU Extension Store.

The Iowa Farm and Rural Life Poll survey has been conducted since 1982, and is the longest-running survey of its kind in the nation. Questionnaires were mailed in February and March 2020, and 1,059 farmers responded to the statewide survey.

Other topics include quality of life and farm financial well-being, economic and policy dimensions of commodity production, awareness of and interest in prairie strips, use of communications technology, and well water testing. View the full 2020 Farm Poll and previous years’ polls online. J. Arbuckle can be reached at 515-294-1497 or arbuckle@iastate.edu.