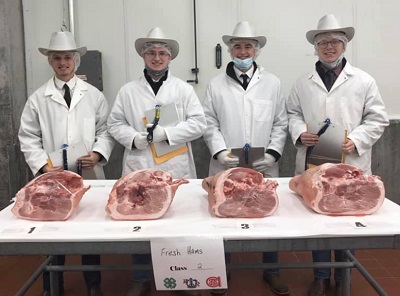 MANHATTAN, Kansas – Iowa’s team placed fourth overall at the 2020 National 4-H meat judging contest. The Oct. 20 contest was held in conjunction with the American Royal at Kansas State University. The team from O’Brien County previously had won the Iowa 4-H meat judging contest, earning the right to represent the state in the national contest.

Contest participants were asked to identify 30 retail cuts by classifying them as beef, pork or lamb; identify where on the carcass the cut originated; name the cut; and evaluate beef and pork carcasses based on muscle, trimness and quality. Youth were also asked to evaluate beef and pork wholesale and retail cuts based on the amount of edible product and quality. They defended their placings by presenting three sets of oral reasons and answering questions about the classes they had evaluated.

Dain Moermond said, “The knowledge I have gained through meat judging has helped me in science classes with anatomy, since part of retail cut identification deals with knowing the muscles and bones of various species of animals. I am also more comfortable speaking in front of groups of people now that I have practiced presenting oral reasons. I enjoy meat judging because I like to compete in a variety of things.”

Bryce Rasmussen said, “Meat judging has offered a unique opportunity to learn a set of new skills that I can use throughout life -- from being a better consumer to problem-solving. I like to judge because it is challenging, and I am constantly learning something new.”