AMES, Iowa -- For some Des Moines County students, summer school was a little different than they expected this year.

Summer school is thought of as a time to catch up on schoolwork and get back in the groove before the regular academic year begins again. This summer, however, some students learned in a unique way.

With Ricochet, an Iowa 4-H leadership initiative, Burlington students learned about leadership, team building and trust, improving themselves along the way.

Rebecca Luers, an Iowa State University Extension and Outreach community development specialist based in Des Moines County, brought the program to Burlington schools. She says it could be the start of something big. 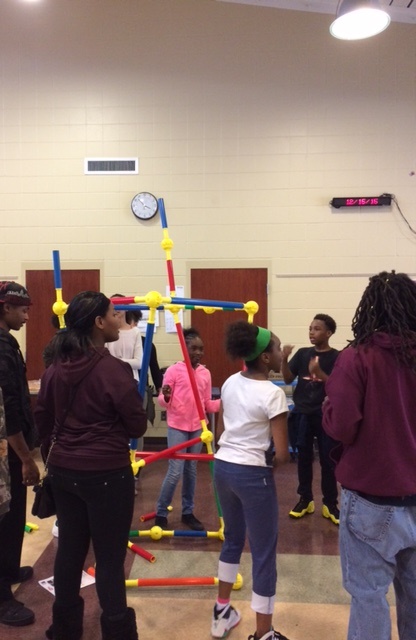 “I think they come into (Ricochet) not understanding what leadership really is, what it means,” she said. “They think it’s not something they can encompass, but I know they have the skill in them for leadership qualities. Before they leave after six weeks (of the program), they all tell me one skill they didn’t know they had that they have found.”

Ricochet’s move into Burlington schools was a continuation of Luers’ work with the program in other schools in the area. She has a background working with youth and became certified to teach Ricochet, and initially did so with Mediapolis middle schoolers, offering a six-week after-school program. She brought the program back for multiple semesters and plans to have a weekly presence during the 2017-18 school year.

Ricochet builds qualities like communication, teamwork and stress management. In addition, students choose a community project, which they implement at the end of the six-week program. Past projects, Luers said, have included fundraising for a local animal shelter and donating clothes to the homeless.

“Students come and get homework help and it keeps students in a safe setting, because who knows what could happen after school,” she said.

Burlington schools were interested, and they brought Luers in for a summer school session, working with underserved students who had fallen behind their peers.

“I can’t say for all of them, but a lot have trust issues with authority,” she said. “And I’m an adult, asking them to do things. But the relationships I build between myself and the students through the curriculum are amazing. They evaluate how I did, (offer) questions and concerns, and it’s very honest. It’s really cool to see how kids changed from the first week to the sixth week.”

“We work together on an activity and at the end, we debrief,” she said. “‘How did you feel when you had to do this?’ We do the debriefing and understand why we did it, wonder what it was and that’s good to know for students.”

Working with middle schoolers is just the start for Ricochet. Luers says the program can be used with government officials, adult leadership and even younger students in elementary school.

“City councils age out, school boards age out, and you wonder who will take leadership roles,” she said. “With our younger population, we need to be improving to engage youth in the communities they live in.”