AMES, Iowa – With a lush pasture at the Erlandson Farm in Greenfield awaiting their arrival, organic dairy steers arrived at their new Iowa home on May 5, completing their journey from the University of Minnesota-Morris Organic Dairy Facility.

The cattle are part of a $1.9 million joint project sponsored by the USDA National Institute of Food and Agriculture, Organic Research and Extension Initiative. The project is headed at Iowa State University by Kathleen Delate, professor and extension organic specialist in horticulture and agronomy, and also includes the University of Minnesota and the Rodale Institute in Pennsylvania.

“Most organic producers separate their pastures and livestock from the cropping systems on their farms,” said Delate. “The long-term goal of this project is to enhance the sustainability of organic systems by integrating crops and livestock in the same space across time. This integrated system is common in many parts of the world, so we hope to examine the biological, environmental and economic aspects in three states (Iowa, Minnesota and Pennsylvania) in the United States.” 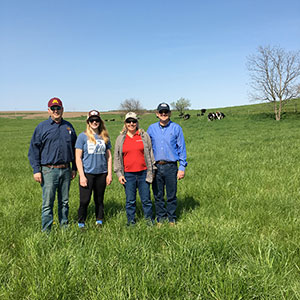 “Organic grazers are looking for a method to extend the pasture season, and small grain forages are of particular interest to them,” said Brad Heins, assistant professor and animal scientist at Minnesota-Morris.

Craig Chase, program manager for the Food Systems Initiative at ISU Extension and Outreach, will be tracking the economics of the integrated systems and anticipates lower production and energy costs through the on-farm production of feed and fertility sources. In addition to reduced production costs, practicing “climate-smart agriculture” through sequestration of carbon may lead to “green” payments, similar to those already in place for California farms.

The addition of manure to cropping systems may trigger food safety concerns, but in the first year of the project ISU Extension and Outreach Specialist in Food Safety Angela Shaw has not found harmful bacteria in feed, forage or animal manure in pastures.

Animals selected for the project are particularly adapted to grass-based diets, such as the Montbeliarde breed from France. Crossbreeding of Montbeliarde cattle also imparts fertility, longevity and calving ease into Holstein cows, while the Holstein genes are associated with increased milk production.

Outcomes from the project are anticipated to include increased producer knowledge and skills to integrate livestock, forage and grain crops, increased soil quality, profitability, and food safety.