AMES, Iowa – While hops have not traditionally been grown in Iowa, the crop is making a comeback in the state as the craft beer industry continues its growth across the country. 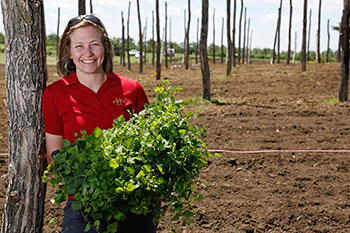 Growing hops is critically important to producing beer, the primary product made from the crop. Iowa State University Extension and Outreach Fruit Specialist Diana Cochran is authoring a series of publications that will provide information on all different aspects of hop production, beginning with "Hop Production 101: Site selection and planting" (HORT 3051).

All publications will be available online at the Extension Store.

“We receive a lot of questions on hop production,” Cochran said. “Hop production is a growing industry that has emerged alongside the craft beer industry. When I got to Iowa State two years ago there were only four or five growers that I knew of in the state; in the last two years there are more than 10 that have started production.”

With nearly 60 breweries in Iowa, the beer industry provides a $100 million impact to the state’s economy, according to the Iowa Brewers Guild. More than 41,000 barrels of beer were produced in the state in 2014. Given the explosion of beer manufacturing in Iowa, choosing the correct location and method for planting hops can be critical to growing success. Although beer is the best known use of hops, the crop has also been used throughout history in medicine, paper products, sleep aids and culinary dishes.

“Hops were grown in Iowa in the early 1900s before the industry moved to the Pacific Northwest,” Cochran said. “In 2006-07 there was a shortage in hop harvest and a fire in a storage warehouse that further limited production. People’s interest began to rise as they started seeing hops as a cash crop. A jump in the price of hops from $3 to $9 helped spur production as well.”

The harvest reward from planting hops is not immediate; it takes three to four seasons before the plant reaches full maturity and can produce maximum yields. This impacts the fertility management demands of the crop, with nitrogen needs drastically smaller initially. Depending on the soil type, the crop needs an estimated 70-75 pounds of nitrogen per acre its first year before requiring 100-150 pounds the following years.

Supplementing natural rainfall also is needed for hops to grow, with the plant needing approximately 1.5 inches of rainfall per week. Iowa receives an average of 31.5 inches of rain each year; providing additional moisture through drip or trickle irrigation is necessary.