Help Teens Get Some Sleep 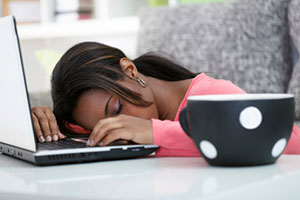 AMES, Iowa -- Anyone who lives with teens often may hear them grumble that they are tired. To lessen the complaints, parents can take steps to help their teens get more sleep, says Cheryl Clark, an Iowa State University Extension and Outreach human sciences specialist.

“We know that many teens just don’t get enough sleep. Several years ago a Reuters Health study showed that many teens stay up well into the night multitasking, but not necessarily doing their homework. They are texting, Web-surfing and gaming,” said Clark, who specializes in family life issues.

Christina J. Calamaro, of Drexel University in Philadelphia, was the lead researcher for the Reuters Health study, which looked at the habits of 100 youth age 12 to 18. The study was described in the June 2009 edition of Pediatrics, the official journal of the American Academy of Pediatrics.

Each youth was assigned a multitasking index based on the total number of hours he or she spent in nine different activities – including watching TV, playing video games and doing homework – divided by nine, which is the number of hours from 9 p.m. to 6 a.m. The teens with the highest multitasking index were at risk for declining school performance and difficulty thinking clearly.

“Experts agree that teens need at least nine hours of sleep every night, but most U.S. teens get an average of seven hours. In this study, one-third of the participants said they fell asleep in school, most twice a day; but some as many as eight times a day. Of those who had their driver’s licenses, half said they felt sleepy while driving and one admitted to falling asleep while driving,” Clark said.

“Teens who get less sleep at night try to counteract their tiredness with caffeine during the day. When the caffeine wears off, they end up falling asleep during the day. Most participants in the study consumed at least 100 mg of caffeine, and one teen drank 1,400 mg a day,” Clark said.

To help teens get more sleep, Clark encourages parents to try to get their teen’s nighttime technology use under control.

“Nighttime texting was a huge issue in the Reuters Health study," Clark said. "Removing the TV, computer and cellphone from your teen’s bedroom is one step you can take. Or you could set limits on the use of these devices no matter where they are located, but realize this will take monitoring."

“Watch your own nighttime use of technology and what it says to your teen,” Clark said.

In addition, parents can discourage teens from drinking caffeinated beverages late in the day. Offer water and other healthy alternatives.

“Once again, your teen is watching your own behavior, so set a good example,” Clark said.

“Your teen’s body clock may be set to stay up somewhat later and wake up later, too. But as parents, you still can model the message that night is time to start slowing down. Help your teen wind down and prepare for that needed rest,” Clark said.