AMES, Iowa – MidWest Plan Service has released a revised and updated version of its “Grain Drying, Handling, and Storage Handbook” (MWPS-13). The publication was developed to assist farmers, elevator managers, equipment dealers, students and others interested in developing grain systems. 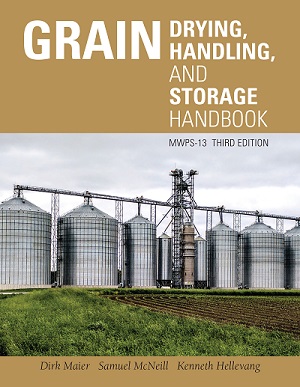 Now in its third edition, the handbook has been substantially updated and expanded to reflect dealing with the larger grain volumes that accumulate at on- and off-farm facilities more rapidly during harvest.

“On-farm grain drying and storage has changed significantly as the capacity of equipment used and the amount of handling and storage that is taking place on the farm have increased,” said Dirk Maier, professor in Ag and Biosystems Engineering at Iowa State University and the publication’s lead author. “This publication focuses on planning a new grain facility or expanding an existing one in order to keep up with harvest at a reasonable speed.”

Two entirely new chapters dealing with the need and importance of safety and automation that comes with faster and larger handling and storage facilities have been added to the publication.

“As capacity increases everything is moving faster or is bigger,” Maier said. “As more equipment runs at higher speeds, many farmers can do themselves what used to be done at a local elevator.”

“Previous versions of the publication contained a number of topics that were relevant for when work was done in a smaller capacity and at a slower speed,” Maier said. “We have added examples that are more representative of how grain is received today. Grain drying and storing systems need to have bigger driveways, scales and conveyors than they have had in the past to accommodate the volume of grain being processed.”

The publication is also useful to help farmers who might be thinking of upgrading their infrastructure to educate themselves before meeting with a design team.

“By consulting a handbook like this, farmers who might be considering expanding their facilities can get enough background material to have an informed conversation with whoever they are dealing with in laying out a system without locking them into something they don’t want from the beginning,” Maier said.

All figures included in previous editions have been redrawn or replaced with new photos. The handbook is also available in color for the first time.

The handbook is available for $74 and can be found online through the MWPS website. Additional questions about this publication, as well as other publications and plans available through MidWest Plan Service can be sent to mwps@iastate.edu or by phone at 515-294-4337.