AMES, Iowa – Wildlife is everywhere in Iowa. From the tiny masked shrew to the iconic white-tailed deer, mammals of all different sizes call this state home.

The 57 species of wild mammals routinely found in Iowa is the focus of a new Iowa State University Extension and Outreach publication titled “Mammals of Iowa” (WL 0006). The guide, which was written and developed with experts from Iowa State and the Iowa Department of Natural Resources, shares a wealth of information about each of the mammals found in Iowa, including their habits and habitats in the state as well as the status of their populations. 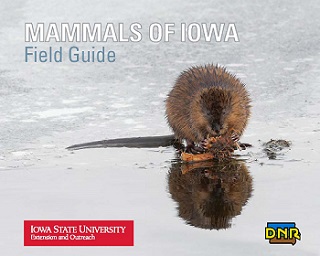 Each species account features a full color photo along with life-sized images of front and hind tracks that can be compared with tracks found in real-life in dirt or snow. A county map of Iowa is also included for each mammal, showing the likelihood of finding each species in the state.

“Iowa’s mammals have very interesting life histories and we tried to tell their stories through this field guide,” said Adam Janke, assistant professor and extension wildlife specialist at Iowa State and one of the authors of the guide. “We want people to know about the diversity of mammals in Iowa and have more detailed information about ones we see every day as well as the ones that are a little more of a mystery.”

The publication includes basic information on additional species that are occasionally seen inside the state’s borders. Species that were once found in Iowa and are no longer present are also highlighted.

In telling the story of wild mammals in Iowa, the publication also recounts the story of conservation in Iowa, describing the ecological restoration of many natural habitats and improved land stewardship that has played out over the last century and helped many species lost in the state’s earliest years.

“There is a long list of mammals that lived in Iowa, were driven out of the state and are now back because of conservation efforts,” Janke said. “While these success stories are laudable, work remains for species like the spotted skunk and many bats that are facing threats related to habitat loss and diseases, as highlighted in the guide.”

Finally, the way humans interact with their fellow mammals is discussed.

“Hopefully readers will be able to better understand and be familiar with the diversity of mammals that enrich our personal experiences,” Janke said. “Animals capture our imagination, and knowing more about what you are seeing makes our experiences in Iowa’s outdoors even more enjoyable.”

Attracting Birds to Your Yard