AMES, Iowa – Average Iowa farmland value has shown a decline for the third year in a row — the first time this has happened since the 1980s farm crisis — and is now estimated to be $7,183 per acre. The statewide per acre value declined $449, or 5.9 percent, since November 2015. Farmland values hit a historic high in 2013, but have steadily declined since then. The statewide average value for an acre of farmland is now about 17.5 percent lower than 2013 values.

The $7,183 per acre, and 5.9 percent drop in value, represents a statewide average of low, medium and high quality farmland. The survey does also report values for each land quality type, crop reporting district (district hereafter) and all 99 counties individually.

“The golden era of phenomenal, yet abnormal growth in farm income and land values, as we saw from 2006 to 2013, is already behind us. The land market is going through an orderly adjustment while the U.S. agricultural sector, a competitive industry, is trying to adjust to the old normal of zero industry-wise net profits,” said Zhang. “For a pessimist, there are reasons to worry, especially for landowners and/or producers who are over-leveraged. For an optimist, this decline is still modest, and the probability of a replay of the 1980s farm crisis is low.”

Zhang said the likelihood of another farm crisis is low due to steady farm income accumulation before the downturn, a stronger government safety net and an overall lower debt level in the agriculture sector.

The decline didn’t come as a surprise for some — in November 2015, over 75 percent of ISU Land Value Survey respondents thought land values in their territory would continue to decline in 2016. The majority predicted the decline would be either less than 5 percent or between 5 and 10 percent, which is consistent with the 5.9 percent decrease reported by the 2016 ISU survey.

“Looking ahead, land values might continue to adjust downwards in the next year or two,” said Zhang. “This is consistent with the stagnant corn and soybean futures prices and potential rise in interest rates; however, many respondents to the ISU survey are hoping for the market to rebound in three or four years.”

Low-quality land in the Southwest and South Central districts were the only areas to show an increase in average values, reporting gains of 2.9 and 5.2 percent, respectively. Zhang says that the increase is due to strong recreational demand and high Conservation Reserve Program payments.

The ISU Land Value Survey was initiated in 1941, the first in the nation, and is sponsored annually by Iowa State University. The survey is typically conducted every November while the results are released every mid-December. Only the state average and the district averages are based directly on the ISU survey data. The county estimates are derived using a procedure that combines the ISU survey results with data from the U.S. Census of Agriculture.

The ISU Land Value Survey is based on reports by agricultural professionals knowledgeable of land market conditions such as appraisers, farm managers and agricultural lenders, and actual land sales. It is intended to provide information on general land value trends, geographical land price relationships, and factors influencing the Iowa land market. The 2016 survey is based on 518 usable responses providing 711 county land values estimates. Forty-eight percent of respondents answered the survey online.

CARD offers a new web portal at https://www.card.iastate.edu/land-value/ that includes visualization tools, such as charts and interactive county maps, allowing users to examine land value trends over time at the county, district, and state level. 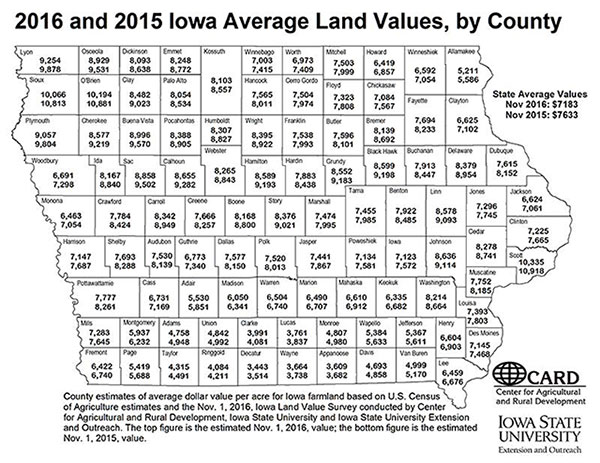