AMES, Iowa — Concern over health issues in cattle that consume ergot-contaminated grain motivated Iowa Beef Center staff at Iowa State University to investigate potential issues around ergot contamination. The 2013 emergence of ergot contamination of forages and small grains in Iowa began with the cool wet spring that allowed the increased prevalence of Claviceps purpura, the fungus that produces ergot.

“This fungus produces a group of chemicals called alkaloids, and the alkaloids cause vasoconstriction with many different clinical signs, depending on effects of consuming contaminated grain or forages,” said Joe Sellers, Iowa State University Extension and Outreach beef specialist. “In summer, this can mean heat intolerance and in cold weather, poor circulation can lead to loss of the tips of ears and tails, and reduced ability to withstand cold temperatures.”

Because several Iowa herds experienced poor reproduction rates and late-term abortions due to extremely high alkaloid consumption, specialists developed a plan to test for ergot alkaloid concentration by sampling hay and other forages in southwest Iowa. 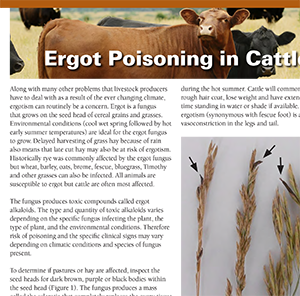 “Twenty-six of the 35 samples collected contained ergot alkaloids,” Sellers said. “These forages were harvested early (before June 15) or late (after July 15) when the sclerotia that produce alkaloids were not present.”

The higher the concentration of ergot alkaloids in feed, the more adverse clinical signs will be present.

“Producers who are feeding mature grass hay harvested in late June or early July should monitor performance of cows fed this hay, and supplement with other feeds to dilute the impact of the alkaloids in the hay,” said Sellers. “Forage nutrient analysis of the 35 lots of hay also found that most of this mature grass hay was short in energy and marginal in crude protein, so supplements that supply both energy and protein, such as corn co-products, will be effective parts of the diet.”

Grazing animals in Iowa will be exposed to ergot alkaloids produced in endophyte infected fescue grasses during the grazing period. Hay produced in Iowa without fescue in the stand typically does not contain any or a small amount of ergot contamination from Claviceps purpura, but the difference in 2013 was a high level of ergot contamination in the hays produced. Also, cattle may have ingested additional alkaloids from stockpiled fescue grass. The effects of Acremonium coenophialum infection and Claviceps purpura infection are additive.

To learn more about ergot poisoning see this new publication, Ergot Poisoning in Cattle (PMR 1013). For additional information, producers should contact their local veterinarian or an extension beef program specialist.

The Iowa Beef Center at Iowa State University was established in 1996 with the goal of supporting the growth and vitality of the state’s beef cattle industry. It comprises faculty and staff from Iowa State University Extension and Outreach, College of Agriculture and Life Sciences and College of Veterinary Medicine, and works to develop and deliver the latest research-based information regarding the beef cattle industry.