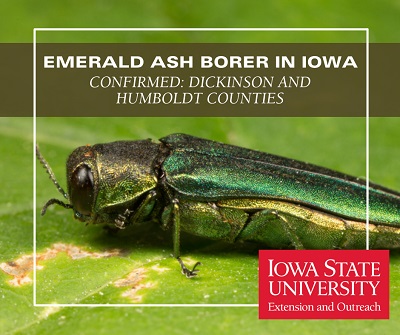 DES MOINES, Iowa – Emerald ash borer has been found in Dickinson and Humboldt counties for the first time. The invasive, ash tree-killing insect from Asia has now been confirmed in all but eight of Iowa’s 99 counties since its original detection in 2010.

The adult beetles of this insect feed on ash leaves, causing very little damage. It is the cumulative damage by larval feeding on the inner bark that eventually kills ash trees. The feeding cuts off the tree’s ability to transport water and nutrients, typically killing a tree within two to four years. EAB is a significant threat to all native ash species.

“Because woodpecker damage can be a sign EAB has infested an ash tree, we receive a number of calls during the winter and early spring,” said Mike Kintner, Iowa Department of Agriculture and Land Stewardship EAB and spongy moth coordinator. “These latest new county detections were the result of green industry professionals alerting our department about the possibility of EAB infested trees based on the woodpecker damage they observed.”

While EAB can travel locally by natural means, long distance spread of this insect is attributed to people moving infested material, including firewood. People are reminded to use locally sourced firewood where it will be burned to help limit the spread of EAB and other invasive pests.