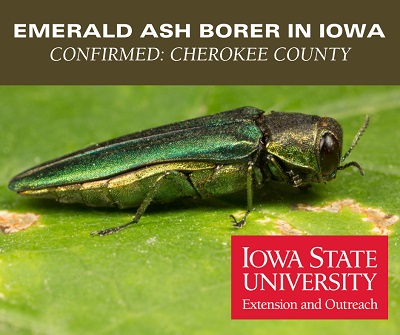 DES MOINES, Iowa – Emerald ash borer has been detected in Cherokee County for the first time. The discovery was made after City of Aurelia workers noticed telltale S-shaped tunneling under the bark of ash trees. This is the 77th county in the state where this invasive pest has been found.

EAB is a significant threat to all species of ash trees. The wood-boring pest tunnels just beneath the bark in the vascular tissue, disrupting the transport of water and nutrients. Infested trees usually die within two to four years.

Indicators of an infestation may include canopy thinning, leafy sprouts shooting from the trunk or main branches, serpentine (“S”-shaped) galleries under the bark, bark splitting, woodpecker damage and 1/8 inch D-shaped exit holes.

“Woodpeckers strip off patches of bark in search of emerald ash borer larvae to feed on. Lighter-colored patches of bark and pecking holes can be indicators an ash tree is infested,” said Mike Kintner, Iowa Department of Agriculture and Land Stewardship EAB and gypsy moth coordinator. “The dormant season is an excellent time of year to evaluate ash trees for woodpecker damage.”

Now is the time to decide a course of action for ash trees at risk of EAB attack (within 15 miles of a known infestation). Landowners and managers can choose to wait and see what happens, remove declining ash trees and replace them with other species, or use preventive insecticide treatments to preserve and protect valuable and healthy ash trees. Spring, mid-April to mid-May, is the best time to treat for EAB. Insecticides are most effective when the ash tree is actively growing, and uptake is at its peak. Tree service companies can apply insecticide trunk injections through the summer if soil moisture is available.

The State of Iowa monitors the spread of EAB on a county-by-county basis. Before a county can be confirmed, a life stage of the insect must be confirmed. Anyone who suspects an infested ash tree in a new location is encouraged to contact one of the following:

The beetle flies only short distances on its own, but human-assisted movement is a major contributor to its spread. Leaving firewood at home and using locally-sourced firewood where it will be burned can help limit the spread of EAB.

Additional information on EAB, including known locations in Iowa, can be found at http://www.iowatreepests.com.

For more information, contact any of the following members of the Iowa EAB Team: