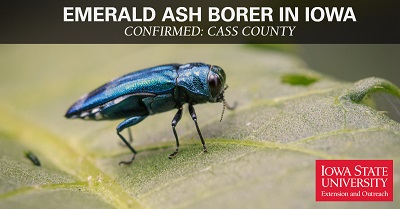 DES MOINES, Iowa – Emerald ash borer has been confirmed for the first time in Cass County. This most recent discovery involved a private property site in rural Massena. Since the first Iowa detection in 2010, the invasive, tree-killing pest has spread to 66 Iowa counties.

EAB is a small, metallic green beetle native to Asia that attacks ash species. In its larval stage, the insect feeds just beneath the bark disrupting the movement of water and nutrients within the tree. Infested trees usually die within two to four years.

“Even though emerald ash borer larvae lay dormant below the bark during the winter months, woodpeckers have a natural ability to find it as a food source,” said Mike Kintner, Iowa Department of Agriculture and Land Stewardship EAB and gypsy moth coordinator. “Patches of stripped bark is an indicator woodpeckers may be feeding on the larval stage of EAB of infested ash trees.”

The adult EAB can fly only short distances, but people have accelerated their spread by moving infested material, particularly firewood. Beneath the bark, larvae can unknowingly be transported to new areas. People are reminded to use locally-sourced firewood where they are going to burn it.

EAB likely arrived in North America on solid wooden packing material originating from Asia. It was first discovered in southeastern Michigan near Detroit in 2002 and has now spread to 35 states.

At this calendar date, the window for all preventive treatments is closed. If a landowner is interested in protecting a valuable and healthy ash tree within 15 miles of a known infestation, he or she should have landscape and tree service companies bid on work, review the bids this winter and treat beginning spring 2019 (early April to mid-May). More details pertaining to treatment are available in Iowa State University Extension and Outreach publication PM 2084. To find a certified applicator in your area, download publication PM 3074 and follow the steps.

The State of Iowa continues to track the movement of EAB on a county-by-county basis. To report a suspected infestation in a new location, contact one of the following:

To learn more about EAB and to view known locations in Iowa, please visit http://www.iowatreepests.com.