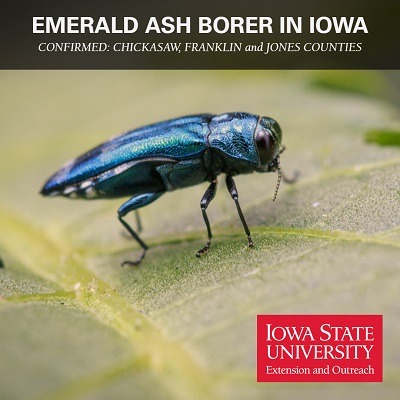 DES MOINES, Iowa – Emerald ash borer has been confirmed in Chickasaw, Franklin and Jones counties for the first time, bringing the total to 69 counties in Iowa where this invasive insect has been detected.

Insect samples were collected from New Hampton (Chickasaw County), Hampton (Franklin County), and Anamosa (Jones County). Officials with the Animal and Plant Health and Inspection Service (APHIS) of the U.S. Department of Agriculture (USDA) confirmed these samples positive for EAB.

EAB is a non-native beetle that attacks and kills ash tree species. Adult beetles lay eggs on the bark of ash trees. Once the eggs hatch, the larvae bore beneath the bark and begin feeding on the water and nutrient-conducting tissues. Infested trees typically die within two to four years.

The spread of EAB is accelerated by transport of infested wood products such as firewood. People are reminded to use locally-sourced firewood to help reduce the spread of EAB.

EAB was first discovered in southeastern Michigan near Detroit in 2002, and has now spread to 35 states. This exotic pest was first detected in Iowa in 2010.

At this calendar date, the treatment window for soil-applied preventive treatment measures (soil injection, soil drench, or granular application) and basal bark sprays has ended. Trunk injections can be done now through the end of August if a landowner is interested in protecting a valuable and healthy ash tree within 15 miles of a known infestation.

To find a certified applicator in your area, download publication PM3074, Finding a Certified Pesticide Applicator for Emerald Ash Borer Treatment, and follow the steps.

The State of Iowa monitors the spread of EAB on a county-by-county basis. Anyone who suspects an infested ash tree in a new location is encouraged to contact one of the following:

To learn more about EAB and other pests that are threatening Iowa’s tree population, please visit http://www.iowatreepests.com.

Category:
Environment
About the Authors:
Iowa Department of Agriculture and Land Stewardship