DES MOINES, Iowa – Emerald ash borer has been discovered in Monona, Osceola and Woodbury counties for the first time. Since its original detection in 2010, the invasive, ash tree-killing insect from Asia has now been confirmed in all but three of Iowa’s 99 counties.

EAB is a significant threat to native ash tree species, typically killing a tree within two to four years after becoming infested. The cumulative damage by the larvae (immature stage) feeding on the inner bark eventually kills ash trees. The feeding cuts off the tree’s ability to transport water and nutrients.

Indicators of an infestation may include canopy thinning, leafy sprouts shooting from the trunk or main branches, serpentine (“S”-shaped) galleries under the bark, bark splitting, woodpecker damage and 1/8-inch, D-shaped, exit holes.

While adult beetles can disperse locally by flying, long-distance spread of this insect is attributed to people moving infested material, including firewood. People are encouraged to use locally sourced firewood where it will be burned to help limit the spread of EAB.

Now is the time to decide a course of action for ash trees at risk of EAB attack (within 15 miles of a known infestation). Landowners and managers can wait and see what happens, remove declining ash trees and replace them with other species, or use preventive insecticide treatments to preserve and protect valuable and healthy ash trees. The best time to treat for EAB is in the spring, from mid-April to mid-May. Insecticides are most effective when the ash tree is actively growing and uptake is at its peak. Tree service companies can apply insecticide trunk injections through the summer if soil moisture is available. 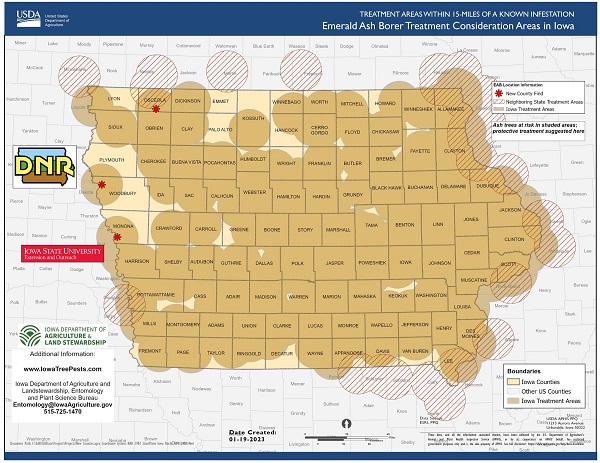