DES MOINES, Iowa – The emerald ash borer, a destructive and invasive insect of ash trees, has been discovered in Missouri Valley. Iowa’s growing number of counties with confirmed detections has now reached 35. Native to Asia, EAB has spread to 27 states since first being identified in Michigan back in 2002. This exotic pest is responsible for the death of tens of millions of ash trees.

Missouri Valley is a city in Harrison County.

The Missouri Valley discovery was the result of an area certified arborist contacting the Iowa EAB Team after visiting some city owned ash trees that a resident had concerns about. After further investigation, an insect specimen was collected by members of the Iowa EAB Team and submitted to the USDA Systematic Entomology Laboratory, which officially confirmed it as EAB.

“This find marks the westernmost site that we have found EAB in Iowa to date,” said Mike Kintner, Iowa Department of Agriculture and Land Stewardship EAB and gypsy moth coordinator. “Six new counties have been detected with EAB in Iowa this year.”

The adult beetle is metallic green and only about one-half inch long and slender, making it difficult to recognize in the landscape. The larvae stage of this wood-boring insect tunnel under the bark of ash trees, disrupting the flow of water and nutrients, ultimately causing the tree to die. EAB infested ash trees include canopy dieback beginning at the top of the tree and progressing downwards, S-shaped feeding galleries under dead or splitting bark, D-shaped exit holes, water sprouts (along the trunk and main branches) and increased woodpecker activity to the bark.

The Iowa EAB Team urges Iowans to use locally sourced firewood, burning it in the same county where it was purchased. Firewood is a vehicle for the movement EAB and other tree-killing pests.

At this calendar date, the treatment window for soil-applied preventive treatment measures (soil injection, soil drench or granular application) and basal bark sprays has ended. Trunk injections can be done now through the end of August, provided there is good ground moisture. Landowners interested in protecting a valuable and healthy ash tree within 15 miles of a known infestation should have landscape or tree service companies bid on work and schedule a treatment.

The State of Iowa will continue to track the movement of EAB on a county-by-county basis. Before a county can be officially recognized as infested, EAB must be collected by a member of the Iowa EAB Team and verified by USDA entomologists.

To learn more about EAB and other pests that are threatening Iowa’s tree population, please visit www.IowaTreePests.com. Please contact any of the following members of the Iowa EAB Team for further information: 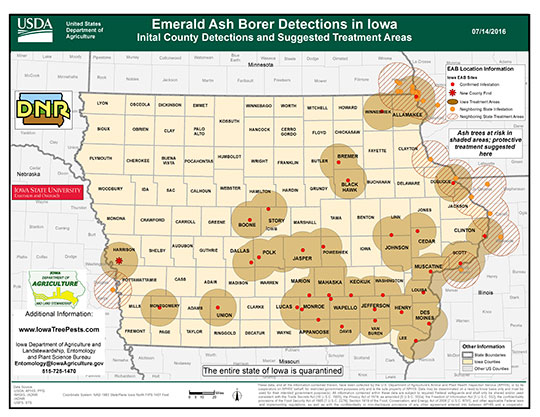