Early Planting Is Possible as Soils Continue to Warm

AMES, Iowa – A warm start to April is giving farmers an opportunity for an early start in the fields. How much to do now depends on where you farm and your level of risk assessment.

According to the April 5 soil temperature map provided by the Iowa Environmental Mesonet, nearly all counties in Iowa are at 50 degrees Fahrenheit or warmer – the minimum for planting corn. 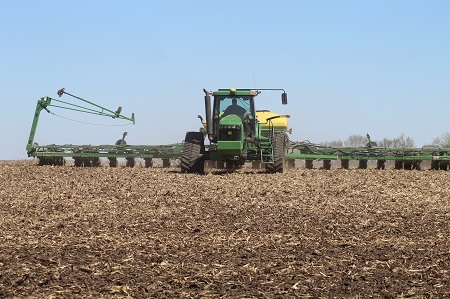 However, agronomists with Iowa State University Extension and Outreach say it’s still early, both in terms of the optimum planting window and the risk for spring frost.

Historically, the optimum planting window for Iowa corn has been April 11 to May 18, with a shorter window in the northern part of the state compared to the south. And the risk for a heavy frost (temperature below 28 F) remains above the 50th percentile until about mid-April.

“It looks like we’re setting up for a beautiful planting season, much like we had last year, but we’re still early for the planting timeframe that is considered ‘maximum yield potential’ for Iowa,” said Meaghan Anderson, field agronomist with ISU Extension and Outreach.

Mark Licht, assistant professor in agronomy and cropping systems specialist for ISU Extension and Outreach, said producers might be better tending to other field tasks before putting seed in the ground. He said crop insurance will not cover a replant until April 11, and there is still plenty of time for planting.

“I think it’s safe to say we are not out of the woods on receiving low temperatures in the 30s or even below yet,” Licht said. “Last year northern Iowa had a frost on May 5. And I can remember many of the last 10 years have had frosts the last week of April or first week of May.”

Licht shared his advice in an April 1 blog post on the Integrated Crop Management website, where updates will be provided throughout the growing season.

As for soybean, Licht said he considers “early planting” to be any time between April 11-25, with “ultra-early” being anything before April 11.

Planting soybean before April 25 can result in higher yields, but the yield potential is not consistent from year to year. He said it is more important to make sure soybean is planted before May 20, to avoid late planting yield declines.

“Planting early ensures you will not be planting late, but it does not mean that you will not experience damage or have to replant,” Licht said.

Farmers will face risk no matter when they decide to plant, but a good start to the season, like most Iowans are seeing now, is always favorable. Prices for corn and soybean are also up from past years, adding more optimism to the start of this year’s crop.