Drop in Land and Some Input Costs Expected in 2018

AMES, Iowa – Land and input costs for corn and soybean production are expected to decline in 2018, according to research conducted by Iowa State University Extension and Outreach.

The research, released in ISU Extension and Outreach publication “Estimated Costs of Crop Production in Iowa – 2018” (FM 1712), shows soybean costs falling by $10 per acre from 2017 levels and corn production dropping by $5 per acre. All cost estimates in the report look at average cost for farms in Iowa. 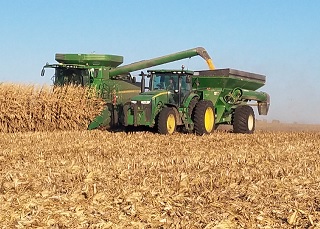 The drop in prices is attributed to a moderate decline in herbicide, fertilizer, lime and seed prices, as well as lower expected cash rent costs. These drops, however, are barely expected to offset increases in machinery, labor, insecticide and crop insurance costs. This is especially true for corn as diesel and gas prices are expected to increase fuel costs by $13-14 per acre.

“This year appears to be a mix of good news and bad news,” said Alejandro Plastina, assistant professor and extension economist at Iowa State University. “The cost of some inputs are going down while labor and fuel costs are going up. The net result is a very small percent reduction in costs for 2018.”

Cost of production has declined significantly since 2012, with total corn costs dropping 19 percent and soybean production falling 14 percent. These reductions in cost, however, are dwarfed by falling prices. The price per bushel of corn is down 53 percent since 2012 and soybean prices have dropped 35 percent.

Stagnant prices and continued tight margins make it even more critical for farmers to know their breakeven price and to have a sound marketing strategy, Plastina said.

“In order for this information to be useful these budgets need to be adapted to the real costs experienced by an operation,” Plastina said. “An accurate breakeven price is based on both costs and expected yields. This is a critical piece of information to have in order to create a marketing strategy.”

Ag Decision Maker file A1-20 has Decision Tools that can help farmers better calculate their operation’s cost of production. Since actual costs vary considerably from farm to farm, the editable spreadsheets can aid them in understanding their crop production budgets for 2018.

“If farmers don’t know their breakeven price then it is really hard for them to determine when to sell their crops,” Plastina said. “Everyone is seeking a higher sales price and if you don’t know when that price is enough to cover costs, then you are always waiting for the next round of price increases to come, which might not happen and you’ve missed an opportunity to sell for a price that will cover costs.”