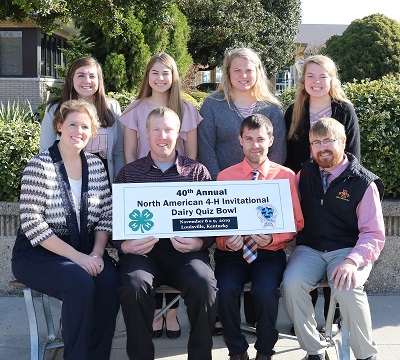 This Delaware County team is only the sixth Iowa team to earn third place or higher in the 38 years Iowa has competed.

“They accomplished it with great teamwork and critical thinking as they navigated challenging questions with attentive learning over their years of 4-H, and particularly the last few months of preparation for the national contest,” said Coach Jennifer Zumbach.

Zumbach said, “I am so proud of how well these young ladies worked together to answer questions throughout the day! They had fun, put their knowledge to use, formed friendships with participants from other states, and can be proud of how well they represented Iowa and Delaware County 4-H. We have enjoyed working with them during their time in Dairy Quiz Bowl.”

The contest format includes each individual taking a 50-question test. Those totals rank the teams. Then the teams enter a double-elimination contest with five test question points being added each round to points earned from five team questions, 20 toss-up buzzer questions, and possible bonus question points when three different team members answer a question correctly.

The team received financial support from the Ron Orth 4-H Dairy Endowment Fund and the Delaware County 4-H Foodstand Fund, which helps defer some costs for 4-H members participating in out-of-county or state activities in return for their time working during the Delaware County Fair.