Control Snakes on a Home Property

AMES, Iowa — Warm spring weather brings out many critters, including some that homeowners may not like to see in their yards — snakes. While there is no 100-percent effective snake deterrent, Iowa State University Extension and Outreach Wildlife Specialist Rebecca Christoffel offers some tips on making a home landscape as “snake-free” as possible. 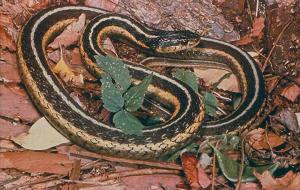 “Garter snakes are harmless and will not hurt people, but encountering one unexpectedly can definitely startle and scare you,” Christoffel said. “The best way to deal with snakes is to make your property less attractive to them.”

Actions that homeowners can take to keep their property less attractive to snakes include:

“These practices should reduce the attractiveness of a property to garter snakes,” Christoffel said.

Christoffel said snakes eat worms, slugs, bugs and other small animals such as frogs or fish. Snakes don't do any damage to buildings because they don't dig their own holes, instead using holes other animals have made.

“An alternative solution is to learn to accept having the snakes around and appreciating the valuable ecosystem services they provide,” Christoffel added. “Snakes are excellent rodent and insect control.”

If a snake is found in an undesirable place, like a garage or shed, Christoffel said a broom and a trash barrel can easily be used to remove it. Lay the trash barrel on its side, and with a broom (soft plastic bristles or straw), “sweep” the snake into the garbage barrel, gently forcing it down to the bottom of the barrel. The barrel, and snake, can then be taken to another area of the property and the snake released out of harm's way.

Do you have a wildlife, or other question? Use our Ask the Expert feature to get an answer.