AMES, Iowa – Iowans who want to do more to help protect bees and provide additional habitat should consider the Conservation Reserve Program.

The federal program, commonly referred to as CRP, has been protecting land and wildlife habitat for 30 years, but more recently, landowners who enroll in the program also have begun taking advantage of protecting pollinators, including honey bees.

Entomologist Randall Cass with Iowa State University Extension and Outreach, wrote an article for the May-June edition of "Acreage Living Newsletter" that helps explain how CRP ground can benefit bees.

Called “Keeping Bees in CRP,” the article discusses a specific part of the CRP designated for establishing pollinator habitat, called the CP 42, or Pollinator Habitat Initiative. 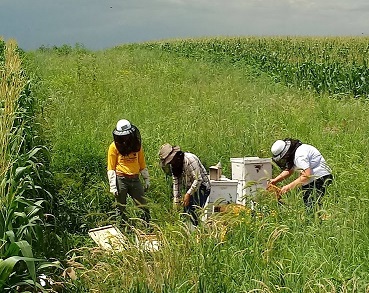 As Cass points out, Iowa is actually a leader in CP 42 land, with about 42% of the nation’s CP 42 land coming from Iowa.

And according to Cass, there is still room for growth.

He said the state is losing its bees at a staggering rate, of about 40-60% per year. With nearly 5,000 beekeepers in Iowa, that amounts to a big loss.

“Scientists point to three major stressors that contribute, synergistically, to bee decline: pesticide exposure, lack of suitable habitat for nesting and foraging, and parasites and pathogens such as the varroa mite,” he said.

CRP land is desirable for pollinators because it is left unfarmed, and in the case of pollinator habitat, it contains a mix of foraging species like wildlflowers and flowering legumes. Research conducted by Iowa State University has shown that honey bees on these sites perform better than when placed near agricultural sites, according to the article.

Cass said there was concern at first, as to whether keeping bees on CRP land was acceptable. He did some research and found that both the Farm Service Agency and the Natural Resource Conservation Service support “access and space for beekeepers to place their hives.”

According to Cass, it’s important that beekeepers and Iowa landowners understand the opportunity that exists. He said that NRCS offices are willing to connect beekeepers with CRP landowners, and landowners can connect with beekeepers by visiting the Iowa Honey Producers Association website to find contact information for a beekeeping club in their area.

For more information, Cass can be reached at randall@iastate.edu, or 515-294-2507. Photos of Iowa bees can be found by following the @iowastatebees Instagram page.