AMES, Iowa – After a reprieve in 2017, commodity prices, interest rates and trade disruptions drove Iowa farmland values down for the fourth time in five years. The average statewide value of an acre of farmland is now estimated to be $7,264. This represents a decrease of 0.8 percent, or $62 per acre, from the 2017 estimate. 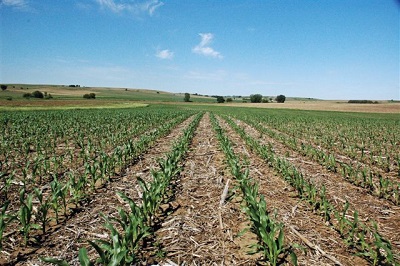 The $7,264 per acre estimate, and 0.8 percent decrease in value, represents a statewide average of low-, medium- and high-quality farmland. The survey also reports values for each land quality type, crop reporting district (district hereafter) and all 99 counties individually.

Commodity prices were one of the biggest factors driving down farmland values this year, according to Zhang.

“Lower commodity prices, in part due to the recent trade disruptions, were cited as the most significant negative factor driving down land values,” Zhang said. He also noted that despite the downturns, farmers don’t need to worry about a sudden collapse of the U.S. agricultural sector similar to the 1980s farm crisis.

“Limited land supply and strong demand by farmers still seems to hold up the land market,” Zhang said. “For five consecutive years, survey respondents have reported fewer sales than the year before, and the ag economy is still robust with 82 percent of the land in Iowa fully paid for.”

Seventy of Iowa’s 99 counties reported lower land values; the remaining 29 reported higher values. For the sixth year in a row, Scott and Decatur counties reported the highest and lowest farmland values, respectively. Decatur County reported a value per acre of $3,488, a gain of $8, or about 0.2 percent, from last year’s report. Scott County reported a value of $10,537, an increase of $40 per acre, or about 0.4 percent.

Statewide, high-, medium- and low-quality farmland values decreased 0.8 percent, 0.7 percent and 1.7 percent, respectively. Despite decreases across all other types of land in all districts, low-quality land in the Northeast, South Central and West Central districts increased in value. Low-, medium- and high-quality farmland values statewide are $4,609, $6,805 and $8,863 per acre, respectively.

The ISU land value survey was initiated in 1941, the first in the nation, and is sponsored annually by Iowa State University. The survey is typically conducted every November and the results are released mid-December. Only the state average and the district averages are based directly on the Iowa State survey data. The county estimates are derived using a procedure that combines the Iowa State survey results with data from the U.S. Census of Agriculture.

The ISU Land Value Survey is based on reports by agricultural professionals knowledgeable of land market conditions such as appraisers, farm managers and agricultural lenders, and actual land sales. It is intended to provide information on general land value trends, geographical land price relationships and factors influencing the Iowa land market. The 2018 survey is based on 792 usable responses from 605 agricultural professionals. Sixty-two percent of the 605 respondents answered the survey online.

CARD offers a web portal at www.card.iastate.edu/farmland that includes visualization tools, such as charts and interactive county maps, allowing users to examine land value trends over time at the county, district and state level.

Results of the 2018 ISU Land Value Survey can also be found on the ISU Extension Store.