Best Practices for Growing Tomatoes Yearly in a High Tunnel 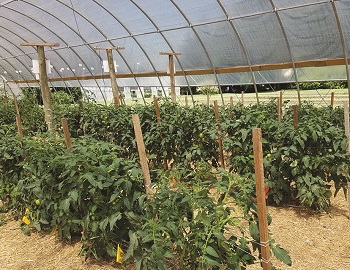 Because of their value to high tunnel producers, tomatoes are often grown every year, despite the increased risk for plant disease outbreaks caused by a monoculture system.

“Growing tomatoes on tomatoes is not the best idea from a soil disease risk management perspective,” said Joe Hannan, commercial horticulture specialist with Iowa State University Extension and Outreach. “However, the reality is that tomatoes are so valuable in a high value environment like a high tunnel so it is easy to justify the risk.”

If farmers do decide to grow tomatoes in their high tunnel on a yearly basis there are several things to consider to help minimize the risk of pest outbreaks:

“Disease management should be used as the primary route of protection,” Hannan said. “The latest hybrids have bred out a lot of problems, particularly in regards to soil based diseases, and growing those varieties is an easy thing to do. If growing heirloom tomatoes, then using grafted plants is recommended.”

Some farms choose to avoid the problems associated with monoculture cropping by switching from growing in the soil to growing in media bags that are discarded at the end of the season. These bags have the advantage of being well drained and are easily replacable. However, plants in grow bags require frequent irrigation and must have 100 percent of their nutritional needs supplied in addition to correcting the water pH.

Other farmers will remove the top six inches of soil at the end of the growing season and replace it with fresh, new soil that has not had vegetables previously grown in it. Along with compaction issues, the soil needs time for pH and potassium availability to stabilize which can cause abnormal nutrient deficiencies.

Additional information on preventing disease in high tunnels can be found in the March issue of the Acreage Living Newsletter from ISU Extension and Outreach.

Additonal resources about growing tomatoes and other vegetables is available through the ISU Extension and Outreach publication “Iowa High Tunnel Fruit and Vegetable Production Manual” (HORT 3060).