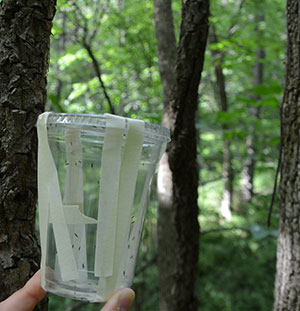 DES MOINES, Iowa – Beneficial insects will be introduced next week at Mount Hosmer City Park in Lansing for the biocontrol of emerald ash borer. These very small stingless wasps target and kill EAB, a devastating exotic pest of ash trees. This control approach known as biological control reunites natural enemies with an invasive pest, in this case to help suppress EAB populations.

Lansing is in Allamakee County.

Following rigorous testing and research one or more parasitic wasp species, native to Asia, have been released in 24 of the 27 states where EAB has been detected. Nearly two months ago this biocontrol effort began in Fairfield in Jefferson County. Additional sites will be utilized pending resources and approval.

Like the county park outside Fairfield, two species of Asian parasitic wasps will be used to seek and destroy EAB at Mount Hosmer City Park in Lansing. Release locations are designed for site-approved public lands and parks and must meet specific guidelines.

“Being able to utilize natural enemies is an approach we can use to our advantage to help reduce the spread of emerald ash borer,” said Mike Kintner, Iowa Department of Agriculture and Land Stewardship EAB and gypsy moth coordinator. “The predatory wasps will never offer complete control, but once established in an area they will spread naturally alongside with EAB, lessening the impact to ash trees across the landscape.”

The two species of parasitic wasps available from USDA Animal and Plant Health Inspection Service target the larval and egg stages of EAB. Tetrastichus planipennisi female wasps, which are about the size of a grain of rice, lay eggs inside EAB larvae, terminating their development into adult beetles. Oobius agrili female wasps, which are the size of a gnat, lay eggs inside EAB eggs, parasitizing them before given the opportunity to hatch. Both species are harmless to people.

More information about EAB and other pests that are threatening Iowa’s tree population, go to www.IowaTreePests.com. Please contact any of the following members of the Iowa EAB Team for further information on EAB: