Be on the Lookout for Snowy Owls This Holiday Season 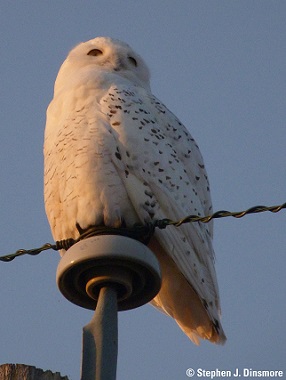 AMES, Iowa – Despite what can feel like Arctic weather sweeping into Iowa during the winter, the state still finds itself a long way from the Arctic tundra. So it would be surprising to find Arctic tundra wildlife soaring over Iowa’s picked corn fields or perching on the state’s telephone poles. But this winter seems to be an exception to that rule, because since early November reports of an iconic tundra-dwelling bird, the snowy owl, have been pouring in from all corners of the state.

Wildlife biologists call the phenomenon a “winter irruption,” and it has already yielded numerous sightings of this all-white, vulture-sized owl in Iowa this winter. The recipe for predicting when a winter irruption will occur is not well understood, according to Stephen Dinsmore, professor of natural resource ecology and management at Iowa State University. But there are a few consistencies in years with more sightings of snowy owls south of their typical range.

“In years with high lemming populations, breeding pairs of snowy owls can sense the increased food supply and quickly make the most of long Arctic days, laying clutches of sometimes more than 10 eggs and successfully raising their young on diets full of lemmings,” said Dinsmore. “In years when most of those young survive, conditions are prime for southward irruption. There become too many mouths to feed in the tundra and young owls are forced south to find food in less familiar landscapes like Iowa.”

Populations of the small, field mouse-like lemmings on the Arctic tundra are cyclical and they become abundant every few years before crashing as they literally eat themselves out of food. These regular cycles coincide with what typically produces snowy owl irruptions, although the magnitude of an irruption can vary.

Another reason this year is shaping up to be a banner year for snowy owl sightings in Iowa is that many parts of the state have had no snow, making it easy to spot a large, white owl.

“Snowy owls, like many northern species, are almost completely white to help them blend in among their typically snow-covered environments,” said Adam Janke, assistant professor and wildlife extension specialist at Iowa State. “Being a white bird on an otherwise brown, gray or black landscape makes hiding a lot harder. So we can be driving along at 55 miles per hour and still spot a snowy owl in a field without snow.”

That additional conspicuousness, coupled with this year’s high numbers, could make the 2017-18 winter one for the record books.

“In a normal winter there are 5-10 snowy owl sightings in Iowa,” said Dinsmore. “In an irruption year, however, there can be a 10-fold or more increase in numbers, similar to the more than 150 sightings during the winter of 2011-12.”

Dinsmore knows of more than 100 sightings so far this winter, suggesting Iowa may be on pace to break its previous record.

“I would really encourage folks to keep their eyes peeled for white objects perched on telephone poles, fence posts and on the ground during the busy holiday travel season,” said Janke, adding that snowy owls never roost in trees. “This year seems to be a really unique opportunity to see an otherwise hard to find, rare bird in Iowa.”

Dinsmore is keeping records of snowy owl sightings this year in Iowa. If you see an owl, email him at cootjr@iastate.edu to share the specific location. If possible, include a picture, which may be able to reveal the age and sex of the owl. This will help document the extent of this year’s irruption.