Be Alert for Diseased Rhododendrons in Iowa

AMES, Iowa — Homeowners, gardeners and landscape managers are advised to be on alert for diseased rhododendrons. A total of six Midwestern states — Iowa, Illinois, Indiana, Kansas, Missouri and Nebraska — have confirmed Sudden Oak Death (SOD) in rhododendron plants that were shipped to retail nurseries across the region. 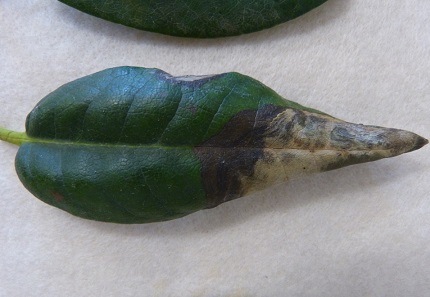 Sudden Oak Death is a plant disease caused by the pathogen Phytophthora ramorum. The pathogen causes two types of symptoms: foliar blights and cankers in stems. This pathogen can spread through infected plant material (the most important source), infested soil and water. Over 50 plants are hosts of the pathogen.

The pathogen was first reported and confirmed in Indiana in May 2019, when regulators confirmed diseased rhododendrons sold at Walmart. Shipping records indicated that the plants were purchased from Parkhill Plants, Oklahoma, which sourced them from nurseries in Washington and British Colombia. A total of 18 states received these plants, which were delivered to independent garden stores, as well as large chains including Walmart, Home Depot and Rural King. In Iowa, all infected plants that were still at stores were destroyed. 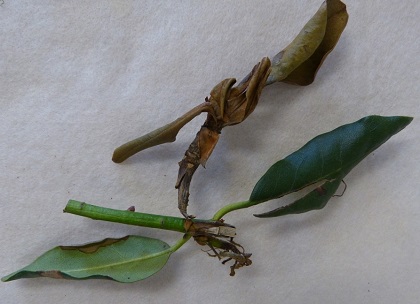 Foliar disease symptoms are expressed as dark grey-to-brown lesions with distinct edges, anywhere on the leaf blade. The infection can spread to the stem, resulting in defoliation and twig dieback.

Gardeners and homeowners who have recently purchased a rhododendron from a retail outlet in any of the 18 states listed above should monitor the plant for signs of disease, including leaf spots and shoot dieback. Questions to consider when evaluating your plants include: was the plant purchased in 2019? Is the plant a rhododendron, azalea or lilac? Is the plant showing symptoms of infection?

Should you suspect your plants are infected, contact the Iowa State University Plant and Insect Diagnostic Clinic (515 294-0581 or pidc@iastate.edu), or make an electronic submission. The clinic can assess the symptoms and recommend the best sample to submit for testing.

Plants that are determined, through laboratory testing, to be infected with P. ramorum should be destroyed immediately to prevent spread, and other plants within a two-feet radius should be scouted for the disease symptoms.

Plants can be destroyed by burning on site, deep burial or by double bagging in heavy duty trash bags (including the root ball) and disposing it/them into a sanitary landfill where permitted. Garden tools should be sanitized before using them in other areas of the landscape. You should check with your local municipality to determine if burning the plant is acceptable.

Category:
Environment, Yard and Garden
About the Authors:
Plant and Insect Diagnostic Clinic