When should I remove the mulch on my strawberry bed? 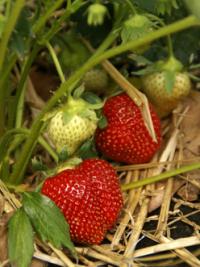 To reduce the chances of crop damage from a late frost or freeze, leave the mulch on as long as possible. Removing the mulch in March may encourage the plants to bloom before the danger of frost is past. Temperatures of 32 F or lower may severely damage or destroy open flowers. Since the first flowers produce the largest berries, a late spring frost or freeze can drastically reduce yields.

I placed soil around the base of my hybrid tea roses in fall.  When should I remove the soil?

Remove the soil in late March or early April in southern Iowa, mid-April in northern portions of the state. A frost or freeze in early spring shouldn’t harm the roses.

After removing the soil, prune out any dead wood. Live wood is green and possesses plump, healthy buds. Dead wood is light to dark brown in color. When pruning, make the cuts about one inch below the dead, brown-colored sections. Remove the entire cane if there is no sign of life.

When should I cut back my ornamental grasses?

Many ornamental grasses provide color, sound and movement to the winter landscape.  Because of these winter features, cut back ornamental grasses in April in Iowa. Cut back the grasses to within 2 to 4 inches of the ground with hand shears, lopping shears or hedge trimmers.

When should I apply a dormant oil spray to my fruit trees?

Dormant oil sprays are highly refined petroleum products that are mixed with water and applied to trees and shrubs to control aphids, spider mites and scale. Dormant oils destroy pests by suffocating them. When applied properly, the thin film of oil plugs the spiracles or pores through which the mite or insect breathes.

Learn about fruit cultivars that grow well in Iowa and growing fruit in Iowa.

Find out how to add winter interest to your yard with ornamental grasses.

Learn how to select, care for and grow roses.

Visit Reiman Gardens and check out Buck roses, ornamental grasses and other garden and lawn plantings.