What are snow peas?

Snow peas are an edible podded pea. Snow peas are harvested when the pods are long and thin, just as the seeds begin to develop. Young pods are tender, stringless and may be stir-fried in Chinese dishes, steamed or cooked like snap beans. If the seeds are allowed to develop fully, they may be shelled and used like garden peas.  Snow peas are sometimes referred to as sugar peas.

What are snap peas?

Snap peas are an edible podded pea. Snap peas are best picked when the seeds are nearly full size and the pod walls are thick, fleshy and crunchy. Snap peas may be eaten raw in salads, snapped and cooked like snap beans, or shelled for garden peas.  They also freeze very well.

What are some good pea varieties for the home garden? 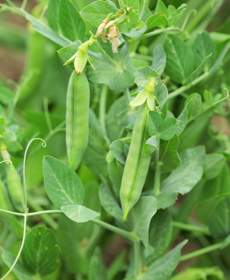 When should peas be planted in the garden?

Do I need to treat my peas with an inoculant before planting?

Peas are members of the legume (Fabaceae) family. Through a symbiotic relationship with a soil bacterium (Rhizobium), peas are able to “fix” atmospheric nitrogen in nodules on their roots.

Peas will grow and produce a crop without inoculation. However, inoculation with a nitrogen-fixing bacterium may be beneficial if peas have not been grown in the garden in the past. Pea inoculants can be purchased at garden centers and from mail-order catalogs. Inoculate pea seeds immediately before sowing. Place a small amount of the pea inoculant into the seed packet and shake.

Find additional information about growing vegetables and herbs at the ISU Extension Online Store. Many publications are available in English and Spanish.

Homegrown Lifestyles is a pilot program being offered by ISU Extension this spring in Sioux City, Adel and Iowa City. The program is for people who want to connect to the land and understand more fully where their food comes from.