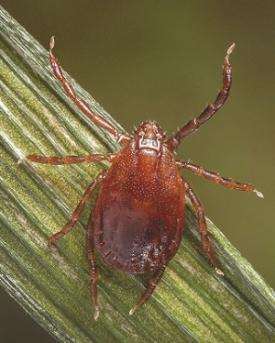 AMES, Iowa – It’s time to be on the lookout for the Asian longhorned tick. While this tick is native to East Asia, it is spreading across the United States and has come as far east as Arkansas and as far north as New York. The United States Department of Agriculture’s  Animal and Plant Health Inspection Service maintains a map of the tick’s spread.

“Native ticks are known to carry blood borne diseases such as Anaplasmosis,” said Grant Dewell, associate professor and extension beef veterinarian at Iowa State University. “The Asian longhorned tick could potentially transmit these diseases once exposed, as well as other blood borne diseases that are not common in the U.S.”

The ALT targets livestock and must feed from a host animal at least three times to complete its life cycle. Feeding from multiple hosts provides opportunity for spread of disease. In New Zealand, these ticks are known to spread Theileria orientalis Ikeda, and so far one similar occurrence has been documented in Virginia. Livestock can die from this disease or even from blood loss due to large numbers of ticks attached.

“Additionally, the sheer number of ticks feeding on individual animals can cause negative impacts on health,” said Dewell. “Producers should be on the lookout for the Asian Longhorn tick and unusual symptoms in livestock.”

A single Asian longhorned tick female can essentially start a new tick population on her own; she can lay up to 2,000 eggs without ever finding a mate. Identifying new infestations and preventing spread is essential.

So far, ALT has not been found in Iowa. However, the ALT resembles the brown dog tick, which can make the ALT easy to miss. The brown dog tick has two spots that resemble eyes near the edge of its body, which are missing from the ALT. Identification tips and photos are available in the new Asian Longhorned Tick Pest Alert.

If you believe you have spotted an ALT, contact the Plant and Insect Diagnostic Clinic at Iowa State University.

The ALT does not target people, but it will still use a person as a host. While these ticks have been shown to carry the pathogen that causes Lyme disease, Borrelia burgdorferi, transmission from one host to another has not yet been confirmed. However, transmission of another tick disease called Rocky Mountain spotted fever has been demonstrated in laboratory conditions. Identification of ALT is essential for monitoring the spread and the potential for disease transmission.

Management strategies for ALT are similar to strategies for dealing with other ticks: avoid ticks, use repellents such as DEET, picaridin or lemon eucalyptus. For livestock producers, trimming grass in and around pastures can be beneficial as well as clearing wooded areas near fences. Livestock should be regularly checked for ticks, and insecticides are available for treatment when needed.

More information about the ALT is available in the pest alert, and details about ticks and tick disease in Iowa are also available at the Iowa State Extension Store.