Along with challenging themselves to answer the difficult questions, senior teams competed for the chance to travel to Louisville, Kentucky, to participate in the National Dairy Quiz Bowl in November. This year, each division winner was also given the honor to take home the traveling plaques in memory of Connie and Sarah Stewart, originally commissioned in 2005, to house them for good. Connie was a Fayette County Dairy Quiz Bowl Team coach. She and her daughter, Sarah, were killed in a plane crash on Easter in 2005. Since then, the plaques, sponsored by the Fayette County Dairy Club, have traveled to the winning county of each division, with a recognition placard. With the plaques now full, they have been retired to the 2021 winners’ counties. 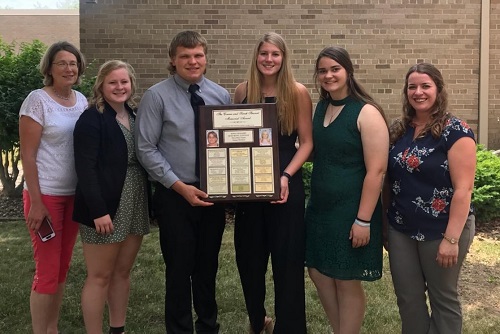 Mike Anderson, state 4-H ag science manager with Iowa State University Extension and Outreach, said, “The Dairy Quiz Bowl is an event that encourages youth to learn about dairy production, science and the industry as a whole in a fun, interactive competition. Several of Iowa’s top senior teams over the years have gone on to compete very well at the national contest.”

This year, the competition was especially heated in the junior division, with one match being won by only a five-point margin. Delaware County eventually came out on top. In the intermediate division, Delaware County Team 1 dominated the competition with three handily won matches in a row as they took the championship honors. Finally, in the senior division, it was anybody’s game as Dubuque came back from a first-round loss to compete in the championship against Fayette, who had begun the day with a first-round bye. Fayette ultimately ended up winning the day by an impressive 135-point margin in the final match.