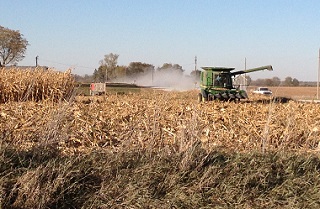 AMES, Iowa – Corn and soybean yields in 2017 were higher than expected, resulting in the largest grain surpluses in recent years. According to United States Department of Agriculture crop production estimates released on Nov. 9, national corn yields exceeded 2016 production. Soybean yields are estimated to be lower than the record in 2016, but total U.S. supply will be larger due to acreage increases.

“Many farmers and grain buyers needed to come up with alternative corn storage plans due to the record-breaking corn yields,” said Charles Hurburgh, professor and grain quality and handling specialist at Iowa State University. “This has resulted in corn piles, some without cover protection. This has created the risk of corn not being in adequate storage conditions due to the lack of aeration and unpredictable weather. Storage bags were also used to store excess grain. Though storage bags keep the grain covered, there is no aeration and the temperature is set once the bag is filled.”

The 2017 growing season experienced significant swings in weather patterns with excessive amounts of rain in the spring and very little rain in June and July. Drought was a major concern in parts of the U.S., especially in the major growing area of the western Cornbelt and four counties in Iowa’s south central region. Dry conditions peaked around Aug. 5-10. The growing season was extended due to moderate temperatures and wet conditions, but the end results were excellent, especially corn, which had very high grain fill with heavy kernels and high test weights.

Long term storage of the 2017 crop into the 2018 season is likely. It will be important to move grain in temporary storage to market or to covered and aerated storage as soon as possible.