Discoloration on Oak Leaves may be Caused by Bur Oak Blight 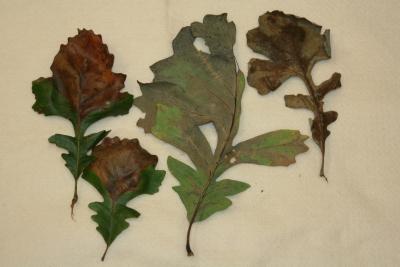 Late summer/early fall is the time of the year when leaves of bur oaks in Iowa are showing V-shaped brown discoloration and browning of the leaf veins. The affected leaves eventually die and fall to the ground or hang dead on the twigs through the winter and into the following year. The disease may affect the entire tree and if only a portion of the tree is affected, the disease is generally most severe in the bottom of the tree.

Many bur oak samples are arriving at the Plant Disease and Insect clinic with clients wondering if the problem is oak wilt, oak decline or bur oak blight. In most of the cases the problem is bur oak blight, or BOB for short. This is a fungal disease of oaks that has been noted in Iowa and neighboring states since at least the early 2000s. Tom Harrington, Iowa State University professor of plant pathology, named the disease and says that it is caused by an undescribed species of Tubakia leaf spot fungus.

What is known so far about this disease?

Harrington has found at least three species of Tubakia in Iowa: the Tubakia species associated with blighted bur oak trees (BOB); Tubakia dryina, which causes leaf spots and vein-browning of leaves of white and bur oak; and a common leaf-spot fungus on red oaks caused by Tubakia castinicolum. So far, rapid death of leaf veins and death of leaves has only been found on bur oak with the unnamed Tubakia species.

The Tubakia species can move into twigs and branches where no symptoms are found but the fungus may overwinter in the tree and invade the new growth the next spring. However, the primary overwinter survival of the Tubakiacausing BOB seems to be the diseased leaves that were killed the year before. Many of the killed leaves persist on the tree through the following summer, and spores from the leaves can infect the next year's crop of leaves. Interestingly, the newly produced leaves look healthy for the first couple of months of the season and do not show symptoms until late July or August. It has been observed in general that trees seriously affected one year tend to be severely affected the next year, and the disease tends to intensify year after year. Severely affected trees begin to show branch mortality, perhaps associated with insect borers attacking the weakened trees. Other trees have apparently died directly because of bur oak blight.

How widespread is this disease in Iowa now?

In 2009 the ISU Plant and Insect Diagnostic clinic has received numerous bur oak samples with bur oak blight from Cerro Gordo, Jefferson, Johnson, Linn, Polk , Marshall, Story, Boone and Crawford counties. In 2008 the disease was confirmed from other counties in western and northwestern Iowa. Potential bur oak blight trees have been observed in Scott and Muscatine counties.

How should infected oaks be managed?

We have no management recommendations at this point, but maintenance of tree vigor may prolong the life of affected trees. Trees may be watered during dry periods, and mulching with wood chips around to the drip-line may help. Fungicide treatments are being tested, but at this time we do not know how effective the treatments might be.

What is being done to understand the disease?

Harrington is studying the distribution and life cycle of the disease with funding from the U.S. Forest Service. The Iowa Department of Natural Resources has established monitoring plots to follow the progression of the disease and tree mortality at the Loess Hills State Forest, Gull Point State Park at Okoboji and Thomas Mitchell Park in Polk County.

A high-resolution photo is available for use with this story: OakBlight.jpg