Bagworms: A Review and a Prediction 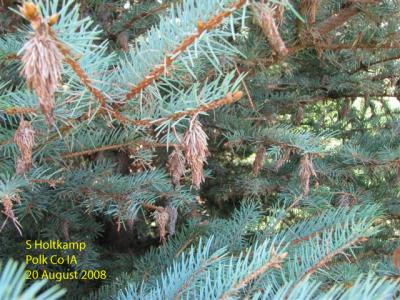 If you live in the southern half of Iowa you are, more likely than not, familiar with the bagworm, a tree-defoliating caterpillar that has become more abundant and more noticeable over the past several years. In addition, they have recently been reported in more areas of the state than previously, including central Iowa north of I-80. Bagworms have always been in far southern Iowa but they have been moving northward over the past five to seven years.

The bagworm caterpillar lives its entire life inside a tough protective case made of silk and camouflaging bits of foliage. Each caterpillar makes its own bag that it carries around as it feeds with the head and legs sticking out the open, top end of the bag. As the caterpillar eats and grows the bag is enlarged until by the end of the summer, what started as tiny pods only one-quarter inch long will have grown to almost two inches in length.

The bagworm commonly attacks arborvitae, red cedar, juniper and spruce trees though it has been reported to eat the leaves and needles from more than 128 different trees and shrubs. Attacked plants may be partially defoliated, weakened and rendered unsightly though it is not uncommon for complete defoliation to occur, resulting in death of the conifer trees mentioned above.

Not the Fall Webworm

There is another caterpillar pest found throughout Iowa that also attacks trees in mid- to late summer. The fall webworms are gregarious caterpillars that collectively construct a gray silken web over the end of tree branches, especially walnut trees, but dozens of others as well. Fall webworms do not occur on conifers and are distinctly different from the bagworm and its individual pods that are carried by the caterpillars from branch to branch and even tree to tree.

In the end of the summer the bagworm caterpillars stop feeding and seal each bag shut after securely tying it to a twig, stem or even nearby structure. Inside the bag the caterpillar transforms to the moth stage. The adult female moth does not leave the bag the caterpillar created. She remains inside while the winged, male moth does emerge to fly about the infested tree to locate the waiting female. After mating, the female lays 500 to 1,000 eggs within her bag and then she dies. The eggs remain in the bags on the trees till the following spring and hatch about mid-June to start the cycle over.

If you have had bagworm infestations in the past, or if you have conifer trees in the southern half of the state, now is the time to carefully inspect trees and shrubs for the bags or pods. Also mark your calendar to check for small caterpillars next June and treat then if caterpillars are present. The bags hanging on the trees now contain the eggs for the next generation (they will hatch next year). These can be removed from small trees by hand and discarded anytime between now and June. Some people find it easier to use scissors to cut bags from the trees rather than trying to pull them off and damage the foliage. Removed bags can be burned if open burning is allowed, buried or soaked in a bucket of detergent water.

Next summer it may be possible on a limited number of small trees to handpick the entire population while the bags are small. If handpicking is not practical, infested plants should be sprayed as soon as the eggs hatch and small larvae begin feeding. Chemical control becomes less effective as the season progresses because of the increased size of the larva and its bag. Insecticides that can be used against the bagworm include Bt (Bacillus thuringiensis), spinosid, azadirachtin (Neem), Sevin, permethrin and many others. Apply according to label directions.

What about next year?

It's a good question to ponder what will happen with this "southern" insect at the northern extent of its range now that those eggs in the pods hanging on the trees have been exposed to temperatures as low as -25 F. The answer is we don't know what will happen, but it is logical to assume the population has been negatively impacted. However, before you get too confident, it is also logical to assume that insects are always survivors and they could still be here next summer regardless of the winter weather. You won't know until you check your trees in June and July. Then we'll all know.

One high resolution photo of a bagworm-infested spruce tree is available for use with this article.
bagwormonspruce.jpg