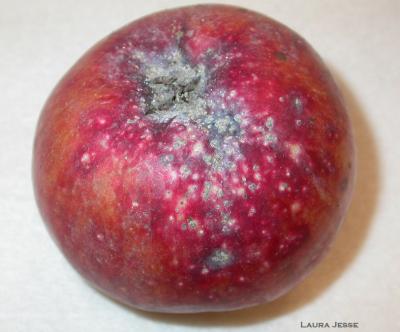 Many of us own and enjoy apple trees, and especially enjoy picking our own fresh apples in the fall.  Unfortunately, this is also the time when many of us take a close look at our apples and realize they are appearing less than appetizing.  We all fear the "worm in the apple," which is actually a caterpillar of the codling moth.  There is another insect pest that is less commonly encountered and many of us wouldn't even recognize as an insect at first –- the San Jose scale.  Personally I would rather bite into a San Jose scale than a codling moth caterpillar, but I have found most people are opposed to eating insects of any shape or size.

Scales are a unique appearing insect. Most of us learned insect basics in grade school and are looking for three body parts (head, thorax and abdomen) and six legs. Then someone tells us a scale is an insect and we look at it and it appears to be one smooth surface and there are certainly no legs in sight.  It is at this point where most of us basically just take the entomologist's word for it that these things are indeed insects.  It is primarily the females that we see on plants, and female scales are wingless and usually legless as adults.  Scale insects start as eggs. The nymphs hatch and do have legs, and this is the stage referred to as crawlers that moves around and infests different parts of the plant.  After that first stage that is mobile, all the rest of the stages do not move.

Scale insects feed by sucking plant sap and may cause poor, stunted growth. Death of infested plants is possible in severe cases. A large quantity of a sweet sticky liquid called honeydew is excreted by scale insects. Honeydew can make a sticky, shiny mess on the plant and nearby furniture and floors. A black fungus called sooty mold may grow on the honeydew.

The San Jose scales overwinter as nymphs beneath the body of the female.  As weather warms they crawl out and settle on a part of the plant and begin feeding.  Branches can become heavily covered in scales and appear sort of warty.  Young scales can settle on the developing fruit as well, usually on the blossom end.  The apple will have halos around the scales.

If you discover you have San Jose scales infesting your apple tree, you will need to take several steps to eliminate the insects.  First of all prune off heavily infested branches as best as you can over the winter (normal time for pruning apple trees).  Then apply a dormant oil spray. You may have to apply an insecticide labeled for scale control on apples to control the crawlers during the summer.  With careful monitoring you can control San Jose scales.  San Jose scales are not easy to control, but it is worth it not to have that extra crunch in your apple pie.