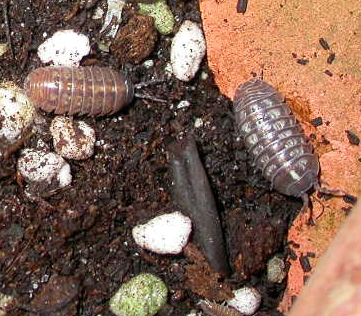 Roly poly sowbugs do not live long indoors after wandering from houseplants.

I imagine this is not houseplants' favorite time of the year.  They got to be outside all summer -- feeling the breezes, soaking up the rain and feeling the sun on their leaves.  Then abruptly they get dragged inside to dry air, short days and possibly a cat chewing on their leaves.

But as sorry as I feel for the plants, I feel even worse for the poor insects and other arthropod hitchhikers that get dragged inside too.  For the most part, the houseplants are species that are not adapted to Iowa winters and must be brought inside to stay alive. But the insects are well adapted to Iowa winters, and would have a better chance of survival if they remained outside.

It is a bit of a myth that insects want to come indoors to stay warm.  Like all animals, insects also need food, and although houses have warmth they often do not have food.  If the insects were outside, the cold temperatures would make them inactive and they would not need to eat.  But indoors the warm temperatures keep the insects active, they burn though any stored energy (fats) and end up starved to death.

Common hitchhikers that do not harm the plants, but are commonly found in the pots of houseplants are sowbugs, millipedes, springtails and fungus gnats.  Although not common, one of my clearest memories from childhood was one of a wood cockroach that came indoors with my mom's houseplants.  My mom is scared of cockroaches and I was mean enough to catch one alive and leave it on the kitchen counter under glass.  I can still hear that shriek.

Wood cockroaches are basically an outdoor cockroach, they do not survive or reproduce indoors like German or American cockroaches that often infest kitchens.  Wood cockroaches, like the other hitchhikers on houseplants take up residence in the pot or saucer because it provides moisture, shelter and food.
Sowbugs, millipedes, springtails and fungus gnat larvae all are common in moist areas and all feed on decaying organic matter or fungi.  They inhabit the pot or saucer of your houseplant where there is moisture, food and shelter.

Sowbugs or pillbugs (also commonly called roly-poly’s) are about one-quarter inch long and gray colored.  They are covered in an armored shell of overlapping plates.

Sowbugs and pillbugs are related, but only the pillbugs are able to roll into a ball when disturbed.  Neither pillbugs nor sowbugs will infest or harm anything in the house.  They will probably remain in the houseplant and if they wander away they will not survive long.

Springtails are small insects (one-sixteenth of an inch) that are common anywhere there is adequate moisture and decaying organic matter.  Many species of springtails are able to jump, using the forked tail held underneath their bodies. When released, the tail launches the insect a short distance through the air.  Springtails are harmless, but can be a nuisance if large numbers are living on houseplants.  The best control for springtails is to let plants dry as much as possible between waterings.

Fungus gnats are small flies that resemble small mosquitoes. The larvae of fungus gnats feed on decaying organic matter and fungi in wet areas.  Houseplants are the most common source of fungus gnat infestations in the home.  The adult flies are very noticeable, but it can be hard to locate which houseplant is the source of the flies.  One way to sniff out the culprit is to bag the pot, wrapping the bag around the base of the plant. If flies collect in the bag after a few days, you have found the source.  Usually reducing watering and letting plants dry out more will solve the problem, but if that does not work, then it may be time to repot the plant using fresh potting mixture and cleaning out the pot and saucer.

Overall these houseplant hitchhikers are harmless and there is no need for concern.  None of them are pests of the plant itself and will not harm anything in your house.  So when you see the roly-poly crossing the floor, gently return it to its pot.  And if you do get a wood cockroach - I do not recommend leaving it on the kitchen counter.

There is one photo for this week's column 1114sowbugs1.jpg