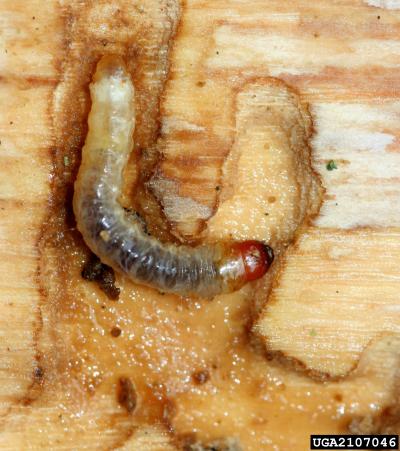 As regulatory and technical teams prepare for the introduction of emerald ash borer into Iowa, significant attention has been paid to ash trees – their location, number and apparent health. A member of the olive family and genus Fraxinus, the predominant ash species in Iowa are green (F. pennsylvanica) and white (F. americana).

These trees comprise 5 percent of the forest canopy and up to 60 percent of urban plantings. Ash trees are excellent for roadsides, parks, campuses, home sites and farmsteads because they can adapt to difficult growing sites, are hardy to at least USDA hardiness zone 3 and provide showy yellow, purplish or burgundy foliage displays in the fall. For the most part, ash trees are tolerant  and/or resistant to insects and diseases.

A Native Ash Pest
In the process of looking for (and not finding) the exotic emerald ash borer, another insect pest of ash trees has been observed: the ash/lilac borer, Podosesia syringae. This native insect is found throughout Iowa and also feeds on lilac and privet.

Wasp Mimic
What is unusual about the ash/lilac borer adult is that they are day-flying moths and they mimic common paper wasps in color, size, shape and flight habits. Many gardeners have unknowingly swatted at an ash/lilac borer during late spring, thinking the insect was a wasp.

The moth’s forewings do not have the typical scales like most moths and are therefore called ‘clearwing’ moths. The forewings are smoky brown and the hind wings are clear with a dark border. Overall wingspan is 1 to 1½ inches. The slender body varies in color from reddish to yellowish to brownish-black with indistinct orange or red bands around the abdomen.

Under the Bark
Ash/lilac borer caterpillars develop beneath the bark of a host plant, where they gouge out the plant tissues that conduct food, water and nutrients. Burrow length may exceed 12 inches long by 1/3 inch wide by two inches deep. Bark-peeling sentinel trees for emerald ash borer surveillance revealed blotchy or palm-like feeding areas caused by this insect. Larvae are creamy white with a brown head, have three pairs of segmented legs and several pairs of fleshy prolegs. When full grown, the ash/lilac borer larva is approximately 1 inch long.

The Damage Low Down
Most ash/lilac borer infestations occur in the lower portion of the host, from the soil line up to 10 feet high. This insect is successful in colonizing declining, stressed or aging trees.  As a borer, its "job" in nature is to aid in the natural recycling of nutrients by accelerating the death of the tree. In some instances, ash/lilac borer causes a rapid decline in their host, while at other times it feeds on the tree for several years before the tree dies.

Young ash trees can be killed by this insect. Structural damage caused by the borers weakens the trees that often break during storms.

Life Cycle
Ash/lilac borer moths begin emerging in the spring, once 300 – 500 heat units (base 50 F) have accumulated. This emergence coincides with the blooming of Vanhoutte spirea (bridal wreath) and faded blooming of common lilac. Adults do not damage host plants but feed on flower nectar.

Females emit a sex pheromone, which serves to attract males for mating. Approximately 400 eggs are laid per female in the week that they live. Eggs are laid on rough bark or near trunk wounds of the host plants. Fourteen days later, the newly–hatched larvae tunnel into the host and feed in the nutrient-rich tissue beneath the bark. Later, they burrow deeper into the sapwood. It is the larval stage that overwinters.

Before pupation in late winter, the larval gallery is extended just under the bark surface, leaving a cellophane-thin window of plant tissue. This allows the new moth to pop through the window and emerge. Often, the brown, brittle, empty pupal cases protrude from the host branches or trunks. Exit holes (¼-inch diameter) are round or oval. Only one generation develops each year.

Control Measures
Minimizing tree stress and injury, especially in young host plants is the best prevention for these borers. This is best done by keeping lawn equipment away from trunks, mulching the root zone and watering during dry periods.

Insecticide sprays can prevent ash/lilac borer attack, but sprays do not control borers already inside the plants. Use pheromone traps in April and May to capture adult males. Spray treatments should be applied 10 days after the first males are trapped. Clearwing traps are available from several sources, including Gempler’s, Great Lakes IPM, Scentry Biologicals and Trece. In the absence of ash/lilac borer pheromone traps, spray in early May when bridal wreath is in full bloom or when lilacs are just finishing bloom and again three weeks later.

Although there are more than 65 products labeled for ash borer control in Iowa, research has shown the most effective preventive products have permethrin as the active ingredient.Systemic insecticides applied to the hosts or to the soil for uptake into the plant have not been found to be of any benefit in control of the ash/lilac borer.