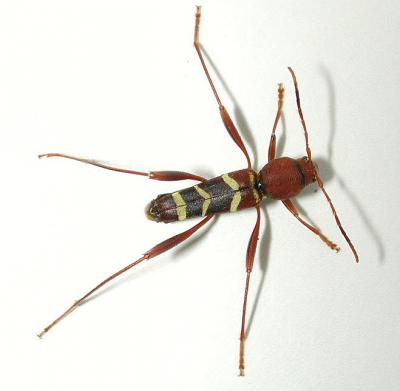 The redheaded ash borer is an Iowa native

The color red evokes various human thoughts and responses. To some it is the color of love and passion, to others it demonstrates importance (red carpet or royal robes); to some it is a reminder of a long journey (red-eye flight) or a night of celebrations (painting the town red). Unfortunately, red also has negative connotations, such as anger (seeing red), deception (red herring), fiery temper or mysterious (redhead), financial ruin (in the red) and danger. Some common 'red flags' include stop signs, brake lights, certain mushrooms, hot peppers, strawberries and tomatoes. Even one of Iowa's native beetles has a name and behavior that can serve as an alert to us.

A Native Colorful Pest
The redheaded ash borer, Neoclytus acuminatus, is a multicolored beetle in the family Cerambycidae. Adults have a reddish head and thorax, and have four bands of fine yellow hairs that cross the dark brown wing covers. Another striking feature of this insect is its legs: the middle and hind legs are long, with the second section (femur) swollen, appearing almost muscular. Overall, the redheaded ash borer is small, only 4-18 mm long.

A Hardwood Omnivore
Typical of native borers, the targets of the redheaded ash borer are stressed and dying trees. These trees can be mature or newly planted, or they can be recently cut and still green (unseasoned). The host list for this borer includes many hardwood tree species, but the favored hosts are ash, oak, hickory, persimmon and hackberry. This insect will also feed in fruit trees, and the author has recovered redheaded ash borers from grapevines.

Construction of new cement camper pads at one campground in Iowa negatively impacted nearby ash trees. Redheaded ash borers found and destroyed these plants that were stressed by excavation activities and associated soil compaction.

The Damaging Stage
It is the immature stage of an insect borer that is destructive to the host. Legless, rounded, cream-colored larvae (10-22mm long) begin development directly beneath the bark in the phloem tissue, but then move to the sapwood and heartwood to eat as they mature. Larval feeding cuts off the nutrient, water and mineral flow and the tree dies. The winding/ meandering tunnels often follow the grain of wood; these tunnels are filled with tightly packed frass granules.

The main trunk and primary branches are sites of larval feeding in older trees. In young trees, larvae cut tunnels vertically along the trunk, as well as around the circumference, causing the trees to be prone to wind breakage.

Adults and Firewood
Adults emerge from infested host wood, chewing 2-5 mm diameter round holes. If the insect host has been made into firewood, the adults can emerge from wood stored in the home prior to burning. Redheaded ash borer adults are seen as a nuisance since they do not lay eggs on household wood or harm occupants.

Life cycle
This native borer overwinters in the pupal stage in infested wood. Adults emerge early spring and feed. According to research from the University of Illinois, the male of this species emits a pheromone, a chemical that attracts both males and females to a location. Once congregated, the insects mate and then lay eggs in bark crevices and cracks or beneath lichens on susceptible hosts. Larval development beneath the bark takes four to six  weeks, followed by pupation. The second generation adults emerge late summer, thus continuing the cycle. Larval development continues into the fall, when the insect pupates and overwinters.