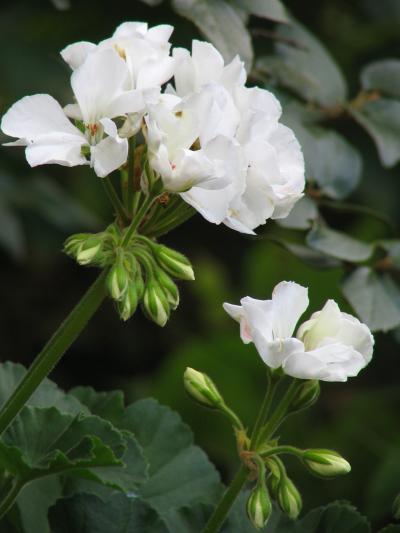 Geranium seeds should be sown in early to mid-February to produce flowering plants for spring.

Geraniums have been a popular bedding plant for many years. Plants are commonly grown from cuttings. However, geraniums can also be grown from seeds. Seed-grown hybrid geraniums possess excellent vigor, heat tolerance, disease resistance and are free-blooming.

Geraniums are relatively easy to grow from seeds. However, geranium seedlings are slow growing. Geranium seeds should be sown in early to mid-February to produce flowering plants for spring. Flowering occurs approximately 13 to 15 weeks after sowing. Suggested seed-grown geraniums for Iowa include varieties in the Elite, Orbit, Maverick, and Multibloom Series. A series is a group of closely related varieties with uniform characteristics, such as height, spread, and flowering habit. Generally, the only characteristic that varies within a series is flower color.

Soilless mixes, such as Jiffy Mix and Redi-earth, are excellent germination media. During germination, damping-off of geranium seedlings can be a serious problem. Damping-off is caused by various types of fungi that attack the seedlings and destroy them. To discourage this, containers used for starting seeds should be clean and have adequate drainage. Previously used containers should be washed in soapy water, then disinfected by dipping in a solution containing one part chlorine bleach and nine parts water.

Fill the container with the germination medium to within 1/2 to 1 inch of the top. Firm the medium lightly, water thoroughly and allow it to drain for a few minutes. Sow the seeds in rows 2 to 3 inches apart and cover with about 1/8 inch of medium. After sowing, thoroughly water the medium by partially submersing the container in water. When the surface becomes wet, remove the container from the water and allow it to drain. The medium also can be moistened with a soft spray of water from a rubber bulb sprinkler or similar device.

To ensure a uniform moisture level during the germination period, cover the container with clear plastic food wrap or a clear plastic dome. Set the container in bright light, but out of direct sunlight. Excessive heat buildup may occur if the covered container is set in direct sunlight. The temperature of the medium during germination should be 70 to 75 degrees F. With favorable temperature and moisture levels, the seeds should begin to germinate in seven to ten days.

Remove the plastic covering as soon as germination occurs. Place the seedlings in a sunny window or under fluorescent lights. Fluorescent lights should be no more than 4 to 6 inches above the seedlings and left on for 12 to 16 hours per day. Using a well-drained commercial potting mix, transplant the seedlings into individual containers when their first true set of leaves appears. Handle the small seedlings by their leaves since the small, thin stems break easily. Insert seedlings to the base of the seed leaves (cotyledons) when transplanting.

For best results, grow seedlings under fluorescent lights. (A standard fluorescent shop fixture with one 40-watt cool white and one 40-watt warm white tube works fine.) Plants grown in a window often become tall and spindly because of inadequate light. Ideal growing temperatures for geraniums are 70 to 75 degrees during the day and 60 to 65 degrees at night. Thoroughly water the geraniums when the soil surface is dry to the touch. If using a commercial potting mix containing a slow-release fertilizer, fertilization probably won’t be necessary. An application of a dilute fertilizer solution once every two weeks should be sufficient for those potting mixes that don’t contain a slow-release fertilizer.

There is one high resolution photo available for use with this week's column:
Geranium.JPG [1.0 MB] Caption: Geraniums are relatively easy to grow from seeds and should be sown in early to mid-February to produce flowering plants for spring.