Why Ever is my Evergreen Brown? 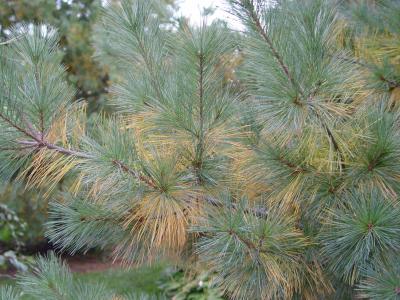 The oldest needles on these white pine branches are turning yellow and dropping, a normal autumn occurrence.

Every fall, foresters and plant pathologists get flooded with calls from distraught tree-lovers. “My pine tree has looked great all summer, and now it’s dying!  What’s wrong?”  With a little probing, we usually find out that, indeed, many of the inner needles are turning yellow or brown and falling off, often alarmingly. Although it’s the time of year when we expect oaks, maples and sycamores to change colors and drop their leaves, we take it for granted that “evergreen” trees, including conifers like pines, spruces and firs, resolutely stay green throughout the winter. After all, they’re “evergreen.”

Although most conifers do stay green all year, most people do not realize that evergreens don’t keep all their needles all the time. Just when the oak trees lose their leaves, most evergreens also drop needles — but not all of them. While an oak tree grows all new leaves every year, most conifers grow a new tuft of needles on each branch, to add to the several years worth of needles it still has. Each year in the fall, it loses the oldest needles (those closest to the trunk). This normal phenomenon is called seasonal needle loss or fall needle drop.

Some of the most noticeable examples of seasonal needle loss occur on white pine and arborvitae. The innermost needles turn bright yellow before dropping in the fall, and usually the ground under a white pine is covered with fallen needles, even though the tree is perfectly healthy. The fallen needles can serve as natural mulch under the tree.

Seasonal needle loss is least obvious on spruces and firs, which retain more years worth of needles, but even on these plants the natural loss can be noticeable in occasional years.

Although some needle loss occurs on conifers each autumn, it tends to be more noticeable on some trees than others and more pronounced in some years than others. It is not unusual for a tree’s needle loss to be unnoticeable for many years, before an especially dramatic autumn. Some stresses such as drought seem to make the needle loss more severe in certain years.

There are two conifers that live in Iowa that really do lose all their needles in the fall, turning golden brown and shedding all foliage until they look dead. Bald cypress and larch trees are considered “deciduous conifers,” and they are not truly evergreens. Although they are barren all winter, they sprout new needles each spring.

Of course, sometimes brown needles on an evergreen really do mean trouble. Not all needle loss is benign. Sometimes serious issues such as insects and diseases, or other stresses such as transplant shock, improper planting, drought or winter desiccation can turn evergreens brown. Needle browning that occurs anytime other than the fall, or that includes needles other than the oldest, innermost needles, should be investigated.  Some diseases cause browning of a few entire branches, or only the bottom branches or the newest, outermost growth.

Death of the oldest, innermost needles on an evergreen in the fall may be alarming, but in most cases, it simply reflects the normal growth of a healthy tree.

There are two photos for this week's column:
WhitePine101207.JPG caption: The oldest needles on these white pine branches are turning yellow and dropping, a normal autumn occurrence.
Arborvitae101207.jpg caption: Arborvitae lose their oldest needles in the fall.