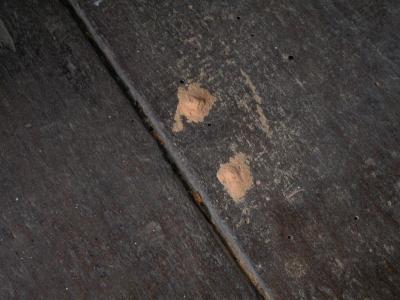 False powderpost beetles feed only in wood with a high moisture content such as that stored in damp basements or on dirt floors in barns or on the ground outside.

The origin of the common name for this interesting group appears to stem from the action of the beetles. They bore into dry wood (such as posts) and change perfectly good wood into powder.  The flour-like powder is actually the chewed up and digested wood that the beetles have eaten.

There are two defining characteristics of powderpost beetle infestations.  First, small piles of the powdery sawdust will appear and reappear after cleaning, under, around or on top of infested furniture or lumber.  Second, numerous small, round holes (1/16" diameter) appear on the wood surface.  Only when the wood is broken open do you find the criss-crossing, powder-filled tunnels inside the wood.

Adult powderpost beetle females lay eggs into open pores and cracks of wood. These eggs hatch into tiny larvae that burrow through the wood creating sawdust-packed tunnels.  After a few months to a year or longer the larvae transform to adults and the new beetles emerge through the small round holes in the wood surface.

Several species of 1/8 inch, reddish-brown to black beetles are collectively known as the powderpost beetles.  These are divided into two major groups depending on the specific type of beetle and the type of lumber they attack.  True powderpost beetles attack the sapwood of freshly cut hardwoods such as oak, ash, hickory, walnut, mahogany and similar species.  Damage is generally confined to the sapwood portions (the portion of the lumber from the outside edge of the tree) of lumber though damage may occur in heartwood.

True powderpost beetles rarely attack wood that is more that 5 years old.  New lumber will support beetle growth and development but most true powderpost beetle infestations disappear on their own as the wood ages.  Varnished and cured lumber is not attacked by these beetles, and softwoods such as pine, spruce and fir used for house framing, are not attacked.

The false powderpost beetles are a more diverse group.  The few species usually found indoors are known as the furniture beetles, deathwatch beetles, "woodworms" (a European term), anobiid beetles and other common names.  These beetles attack both hardwoods and softwoods (conifer tree lumber).  The damage is similar to that described earlier. The larvae live inside the wood and make powder-filled tunnels and the adults emerge, leaving small "shot holes" in the wood surface.

False powderpost beetles are most common in wood that is more than 10 years old.  They prefer to feed in sapwood  but may feed in all wood, especially wood left undisturbed in cool, moist locations.  Moisture is the key component:  false powderpost beetles only feed in wood with a high moisture content such as that stored in damp basements or on dirt floors in barns or on the ground outside.  False powderpost beetles take 2 to 3 years to develop, so damage accumulates slowly, but over time, may turn the entire board or piece of furniture to dust!

Actions following discovery or suspicion of powderpost beetles depend on the severity and extent of the infestation, area or items being attacked, treatment or repair expense and other factors.  Powderpost beetles damage wood slowly.  You do not need to rush to treat.   A "wait and see" approach is often desirable, especially when there is doubt as to whether the infestation is still active.

The practical alternative is often to repair, replace or discard damaged wood.  If new cabinets or floor boards have a few widely scattered holes, repair with wood filler may be all that is necessary.  More extensively-damaged floor joists or furniture might be repairable, though sadly, many old pieces are so completely destroyed that discarding is the only choice.  If salvage is practical the most important next step, especially if false powderpost beetles are involved, is to get the lumber or wooden item to a dry location and keep it dry.

In some cases it may be practical to employ a licensed and certified pest control professional to chemically treat the surface of infested wood with a labeled insecticide.  These special insecticides are usually not readily available to the general public.  Existing finishes such as paint or varnish must be removed prior to insecticide application.  Fumigation of infested lumber or movable items is a possibility, but is usually not practical in Iowa.