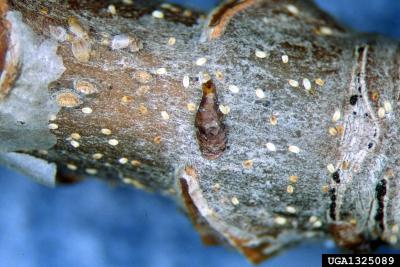 The newly hatched scale insects are called crawlers.  The crawlers are pale and smaller than a pinhead.  This is the only mobile stage in the life history of the oystershell scale.

Among the more secretive creatures in the animal world are armored scale insects. These tiny insects (less than 1/8 inch long) live under a protective cover on the leaves or bark of their host plant. Armored scales are enclosed in this cover that is constructed of wax, shed skins and other substances.

Underneath the camouflaged cover, you can find an animal not resembling any insect you have seen: no eyes, legs or visible antennae, and its body appears to be somewhat flattened and sac-like. Words such as “bizarre” and “amazing” might come to mind in response to seeing these insects for the first time.

These tiny insects get their nourishment from the host plant. Specifically, armored scale insects feed on individual plant cell contents. In contrast, aphids (a scale relative) feed on plant ‘sap’ (phloem tissue). Because of this difference in feeding sites, armored scale mouthparts are several times longer than their body, which enables them to feed on a large area of plant tissue to meet their nutritional requirements.

One type of armored scale insect is the oystershell scale, Lepidosaphes ulmi. Actually, this species is one of the most widely known scales in the world. Although it is most common in northern states, oystershell scales can be found in all of the continental United States.

Oystershell scales overwinter as white eggs beneath the female cover. Late May or early June, the eggs hatch and tiny white "crawlers" find new feeding sites on the host plant. Newly settled scales begin producing a waxy cover almost immediately. These insects feed at this site until development is complete.

Because the insect is wingless, dispersal occurs only during the crawler stage.  Winds will carry crawlers to new plants, as will a bird or squirrel visiting an infested plant while crawlers are active.

Oystershell scales can overwhelm a host. As populations increase in number, entire branches may be encrusted with scales. If this pest is not controlled early, leaves on affected twigs or branches drop and dieback occurs, both of leaves and twigs/branches.

There are options to managing oystershell scale:

1. If the infestation is limited on a host plant, pruning off the infested branches is a good place to start. You will want to observe this plant during the summer in case you missed some scales.

2. Gently scrub off scale covers of overwintering scales with a plastic dish pad. This should be done before eggs hatch in the spring.

3. Apply horticultural oil to the host plant before bud break in spring. Oils suffocate the eggs, preventing them from hatching.

4. Apply an insecticide spray as the crawlers are active. Crawler activity can be monitored by examining infested plants prior to expected emergence. Portions of the host plant can be shaken over a sheet of colored paper and the white crawlers can be seen moving about if you use a hand lens or magnifying glass. Active ingredients for crawler sprays include azadirachtin, bifenthrin, carbaryl, cyfluthrin, esfenvalerate, horticultural oils, insecticidal soaps, lambda-cyfluthrin, malathion or permethrin.  NOTE: armored scale infestations are not candidates for systemic insecticides, since these insecticides fail to move in high concentration into plant cell tissue where armored scales feed.

5. There are natural enemies that feed on armored scales, such as lady beetles, predatory mites and small parasitic wasps.  If targeting the crawler stage in your management plan, the use of horticultural oils or insecticidal soaps will soften the impact on the natural enemies compared to other spray materials.

There is one photo for this week's column.
OystershellScale6107.jpg Caption: The newly hatched scale insects are called crawlers.  The crawlers are pale and smaller than a pinhead.  This is the only mobile stage in the life history of the oystershell scale.  Whitney Cranshaw, Colorado State University, www.forestryimages.org.